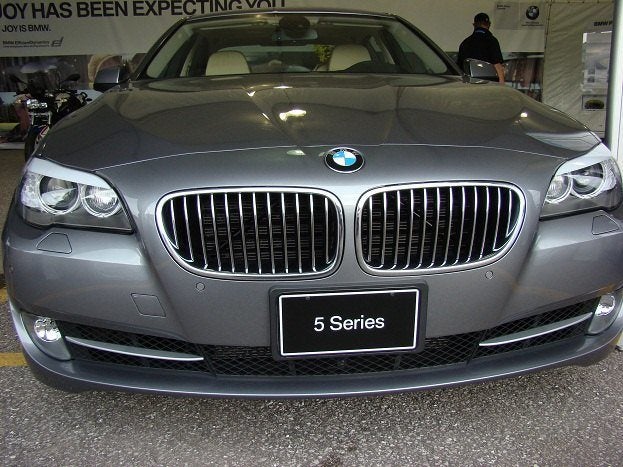 The redesigned BMW 5-Series, beyond being identified as the “The ultimate driving machine”, will be known less musically as the ultimate safety machine. Receiving 5-star ratings for side impact and rollover resistance, the 5-Sedan sedan was rewarded with 4 stars in frontal impact. No vehicle in the 2011 model year assortment obtained a perfect 5-star score following all three individual crash test scenarios.

The second and final overall 5-star rated vehicle the five-star overall rating was rewarded to the 2011 Hyundai Sonata. Existing on the more family-friendly offering of the two top picks of the NHTSA this cycle, the rating for the Hyundai mid-sized sedan gets a little complicating as the types of Sonatas were tested. One built before June of this year and another Sonata produced since June. Playing into the NHTSA new guidelines for automotive evaluation, the later models of the 2011 Hyundai Sonata owes the improved rating to electronic safety aids. Not listed as available on the early release models, Lane Departure and Collision Warning systems are optional on Sonatas built after June 1st of this year. Sonatas produced prior to June 1 receives a 3-star rating for frontal crash impact demoting the early release Hyundai’s to an overall 4-star score.

While the BMW 5-Series and the Hyundai Sonata were the only 5-star crash rating recipients for the 2011 model year, it’s noteworthy that product offerings from Audi compiled a very strong 4-star rating. The Audi A4, S4 and A4 Avant recorded an identical pattern of crash test results (two 5-star and a 4-star rating in frontal impact) but did not receive the 5-star overall score by the NHTSA. In Europe, the Audi A4 did receive a 5-star crash testing score set by the region’s Euro NCAP standards.

Reflecting the results of previous years, a higher sticker price does not necessarily amount in a better star-rating. While the BMW 5-Series was one of the more expensive cars tested in this crash testing cycle, the 4-star rated 2011 products range presents a wide variety of pricing and vehicle types. Among this grouping, the 2011 Ford Fiesta came just short of an overall 5-star crash test rating.

As the Ford Fiesta admirable 4-Star overall effort pushed the case in one way for the safety of smaller cars, another B-Segment vehicle left the 2011 evaluation with an embarrassingly low rating. The Nissan Versa received the poorest overall grade of all vehicles tested with only 2 stars. A lackluster side impact test and the lack of standard electronic stability control weighed on the small Versa receiving a harsh rating.

On the other side of the vehicle size spectrum, the large sport utility vehicles from General Motors were shown quite safe in front and side impacts badged with five-star ratings. Testing the Cadillac Escalade, GMC Yukon and the Chevrolet Tahoe in rear-wheel as well as four-wheel drive, their Achilles heel was in the rollover tests. These vehicles received a only three stars in the rollover evaluation even with electronic stability control.

Though the BMW 5-Series and the Hyundai Sonata are definitely the top picks for impact protection in 2011, All vehicles tested by the NHTSA met United States automotive safety requirements.