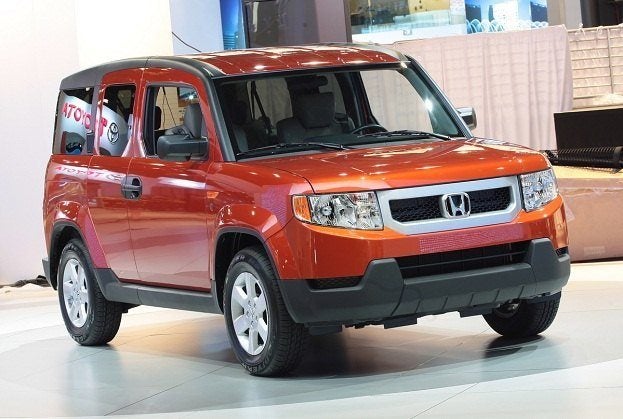 With no changes made to the 10-year Honda Element in the 2011 model year, it could be said the writing was on the social network wall for the future of the youth-positioned vehicle. In a not-so-surprising announcement, Honda will be pulling the plug on their long-time compact crossover utility vehicle at the end of the 2011 model year.

As the 21st century bloomed with an automotive public seeking more truck-like vehicles, the creative grounds for the crossover utility was an undiscovered country for auto companies. An intrepid search for a small vehicle design led Honda to perceive a less conventional shape which could woo customers who have outgrown their Honda Civic. Already selling the CR-V, the Japanese-bred auto company wanted a vehicle that would make a more inventive styling statement. Playing with the confides of the typical box-like utility, the Honda Element was given unmistakable form as an type of urban adventure vehicle.

Based on a 2001 concept car called the Model X, the production upheld much of the exterior styling cues to bring a bold, authoritative stance. Debuting in the 2003 model year, the Honda Element was advertised as an “Active Lifestyle Vehicle” ideal for enjoying outdoor activities whether being a trip to the bench or a weekend at the campgrounds. The Element’s 101.4 inch wheelbase lent itself to city dwellers weekdays in between adventures.

Ten years of production for the Honda Element has seen this utility vehicle identified for trademark features including a wide, pillar passenger door entrance and a urethane-coated interior floor promoting easy cleanup. Through the years, advancements to the Element saw several creative additions in the name of safety as well as the optimization of the up to 74.6 cubic feet of rear storage. Last year, the Honda Element gave canine fans a bone with an optional Dog Friendly package. A vehicle that sparkled with emotion and live, the Honda Element was targeted to the under-30 automobile buying public. However, with over 325,000 examples of this unique vehicle sold the Element has appealed to a wide automotive audience. As a confident cargo vehicle, many Honda Elements were drafted for urban commercial use by small businesses.

When the final Honda Element exits the East Liberty, Ohio plant, the utility vehicle departs in 2011 after pioneering a new progressive step in modern automotive styling. Today, vehicles like the Nissan Cube as well as the Juke, Mini Countryman and Kia Soul are crops of the hip, compact crossover design direction.