Nissan is a diverse company, aiming to provide something for everyone with a bit of individuality. At the Los Angeles International Auto Show, the Quest and Murano CrossCabriolet were introduced. Both are quite unique vehicles, and while we question the CrossCabriolet’s purpose, we like to see automakers taking risks.

There was another Nissan car was introduced at the show though – the updated 2012 GT-R. That would, no doubt, have to be our favorite of Nissan’s introductions at L.A.

The current GT-R was introduced in the United States in July 2008 as a 2009 model, and while not much time as passed, Nissan isn’t content to rest on its laurels. For 2012, the GT-R has gotten some significant enhancements to its performance credentials – and they show with the car’s 0-60 time. There a few little tweaks to the styling for 2012 and most are about improving performance, such as a larger grille and double rectifier fins that help the engine breathe better. But the changes mainly center around the added power.

Yes, you read that right….just 2.9 seconds for the GT-R. Extremely impressive for a car of its price – wearing an MSRP of $89,950 for the base model and going up to $96,100 for the GT-R Premium and Black Edition models.

The new GT-R also promises to handle and stop better with stiffened dampers, the addition of a carbon fiber front cross brace and front brakes 15.4 inches in diameter, an increase of 0.4 inches. The updated GT-R is set to go on sale early next year. Nissan was eager to provide proof of the GT-R’s 2.9-second 0-60 run and as such, included a digital readout from the speed measurement device used to clock it. Check it out below. 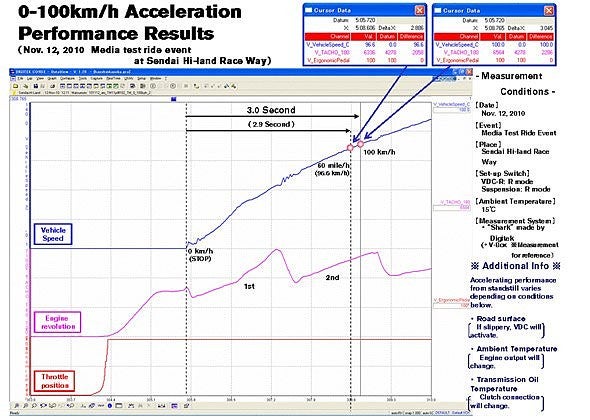