Motivated by the brand’s emerging brand identity as “Confidence in Motion”, Subaru asserts that this Impreza concept adapts a striking collection of shapes and textures which is yet evident in their production cars. “Through “Confidence in Motion”, we will continue to establish the relationship of confidence with more customers and further strengthen our Subaru brand.” Ikuo Mori, President of Subaru’s parent company Fiji Heavy Industries Ltd. said at the Los Angeles Auto Show’s press conference.

A sign of a new dimension of Subaru design, the Impreza Concept’s exterior is quite a defining sculpture constructed with remarkable simplicity. Little less than an inch longer in wheelbase, the Impreza Concept is considerably lower than the existing Subaru Impreza. This concept sedan by Subaru is even 1.8 inches shorter in overall height than a 2011 Impreza WRX. Performance-oriented front and rear styling charges emotion into the vehicle’s potential handling prowess while the silky smooth side is intentionally purposeful. “Hawk-eye-style” headlamps glow within the hexagonal front end form. Wheel arches are placed to emphasize the Subaru all-wheel drive system which launches the Impreza Concept. Though largely original, Subaru has apparently borrowed a chapter from the 1990s Chrysler “cab-forward” design. On the Impreza Concept, Subaru has stretched the concept car’s roof front A-pillar and rear C-pillar to not only cast a more sporty, aerodynamic look but to improve interior space.

In regard to the Subaru Impreza concept’s cabin, seating is provided comfortably for four occupants on premium leather. Stylishly surrounded by blue piping and stitching, the Impreza Concept interior flow is focused upwards at a very luminescent dash panel. A multi-function center touchscreen controlling audio, navigation as well as vehicle information. The steering wheel integrates touch screen interfaces for what Subaru recognizes as stress-free use. Subaru’s advanced safety system aid called Eyesight uses sensors to alert driver of a collision or potential slow down the vehicle itself. Video through Eyesight Stereo Camera is provided via an in-dash monitor. 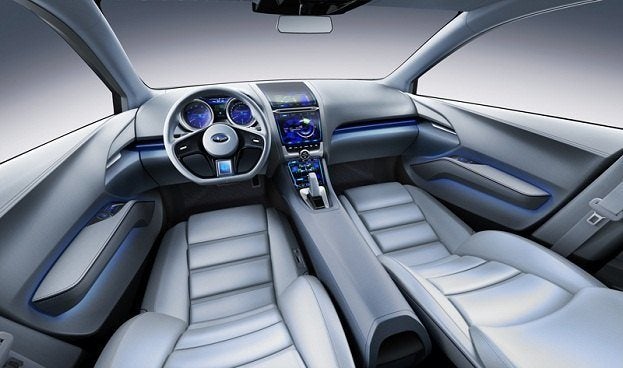 Spotlighting a radical, new design, the Subaru Impreza Concept conceals a differing drivetrain from the current production Impreza. A normally aspirated, Boxer-style engine is found under the elegant hood. Fascinating enough only 2 liters in displacement, this flat-four powerplant is 0.5 liters smaller than the United States market’s base engine. Horsepower and other engine vitals were not revealed at the premiere of the potential Subaru. Mated with a continuously variable transmission (CVT), this Subaru Impreza Concept appears to be making a dedicated effort to supply peak fuel mileage. Despite the compact four-door concept car’s innovations, certain traditions continue to be upheld on the Subaru Impreza Concept sedan. Symmetrical all-wheel drive moves the 19 inch Subaru Impreza Concept’s aluminum rims.

Promoting a potentially new brand identity for future Subaru vehicles, we should not be surprised if the next production-based Subaru Impreza will strictly adhere to the framework of this concept vehicle.