As was stated with Toyota’s partnership with Tesla formed earlier this year, there was going to be a mutual benefit to the furthering of electric vehicles. As Tesla Motors received much-needed finances and use of the former NUMMI plant in California, Toyota would obtain the upstart electric auto company’s applied expertise in electric powertrain manufacturing. Unveiled at the 2010 Los Angeles Auto Show, the electric version of the Toyota RAV4 is officially given a once-over first by journalists and later by auto show spectators. Presenting 1 of 35 demonstrated models of the RAV4 EV which is admittedly retrofitted with an electric powertrain, Toyota has defined this prototype vehicle part of “Phase Zero”. President of Toyota Motors Sales USA Jim Lentz affirmed that continuing development of the Phase Zero RAV4 EVs will lead to enhancements to a 2012 production version.

The small sport utility vehicle will be built similar to fuel-burning RAV4 models at the Woodstock, Ontario, Canada plant. Small adjusts to the interior and exterior are performed to differentiate Toyota RAV4 EV from conventional RAV4 models. A new front end fascia involves a smaller grille opening (a customary design move since the cooling needs of an electric vehicle is far less than one powered by an internal combustion engine). Specialized EV badging and exterior paint colour described as ‘mutually exclusive’ are also found on this Toyota RAV4 EV. Interior enhancement for the RAV4 EV features special seating, multimedia dash and a push-button gear shifter.

RAV4 products destined for the EV treatment will be sent from Woodstock (absent powertrain components) to Tesla’s Palo Alto, California facility. In the Tesla plant, a battery, electrical motor and hardware will be installed to complete the 2012 Toyota RAV4 EV. Full technical specifications are yet to be determined for the production vehicle but the RAV4 EV will run for between 80-110 miles on a charge which can be facilitated from a 220-volt household charger. 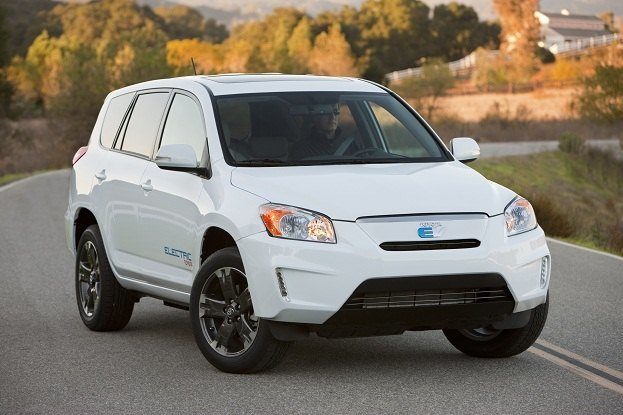 Pricing details for the 2012 Toyota RAV4 EV are yet to be announced but Toyota USA president Lentz commented that the auto company will do everything possible to make it reasonable. “Providing a compelling product is one thing. Creating an attractive value proposition is another.” Lentz said in the press conference in Los Angeles.

A highly-public champion for the usage of electrical powertrains, Toyota’s first charged-up the North American marketplace with the Prius. Now, with almost 10 years of sales in United States, the Toyota Prius and its Hybrid Synergy Drive has bred 6 other current Toyota and Lexus products using a hybrid power. On-deck for the Prius is a plug-in hybrid version planned for sales within a year.

Before Toyota Prius roamed the American streets and the dreams of environmentalists, the Toyota RAV4 was in fact an early test bed for all-electric vehicle power. In 1997, a first generation Toyota RAV4 EV was built created as an auto industry-wide attempt to pay lip service to California ill-fated and poorly-backed initiative to have 10 percent of their state’s vehicles run on electric propulsion by the year 2000. Incredibly, 746 of these first-gen RAV4 electrics remain in existence as road-worthy vehicles.

Toyota’s respect for their early electric vehicle is unlike the practice of now green car corporate stumpers General Motors and Honda. Leasing their vehicles at the time as the first Toyota RAV4’s sales, once the California state law was abolished, both companies made a legal decision to viciously destroy much of the practical evidence relating to their early electric car work.

In little more than a year, the reaction to the 2012 Toyota RAV4 EV will determine if the Toyota/Tesla pairing flatters each other with a mutual attractiveness as a proton and electron.