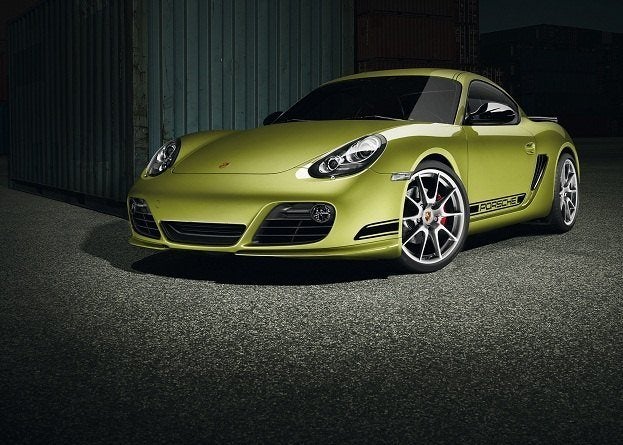 While Porsche has long branched out into sport utility vehicles and even a more handy sedan, loyalists to the two-door sports car lifestyle may feel somewhat disrespected. Their concern is the core values of the German car builder is conceding to new markets as well as the increased reliance on comfort-based electronics. Thankfully, over the past year, racier editions of the Porsche 911 (Carrera GTS and the Speedster) has invigorated the essence of sports car performance.

Revealed in a Peridot Metallic colour at the 2010 Los Angeles Auto Show, Porsche has torn the covers off their newest edition vehicle. Exploiting many of the technical advantages used to construct the Porsche Boxster Spyder, the Porsche Cayman R is a pure, bare bones sports car.

In creating the 2012 R version, the Porsche Cayman’s body now rests 0.79 inches lower than the Cayman S thanks to a specialized sports suspension. Holding tighter to the ground, improved center of gravity translates into fluid handling in corners and more aerodynamic utilization in a straight line. Lightweight 19 inch wheels reduces the unsprung weight of the vehicle further enhancing the Cayman R’s manners. Also driven by the initiative of reducing weight, the Porsche Cayman R replaces door panels with aluminum reducing the weight by 33 pounds. 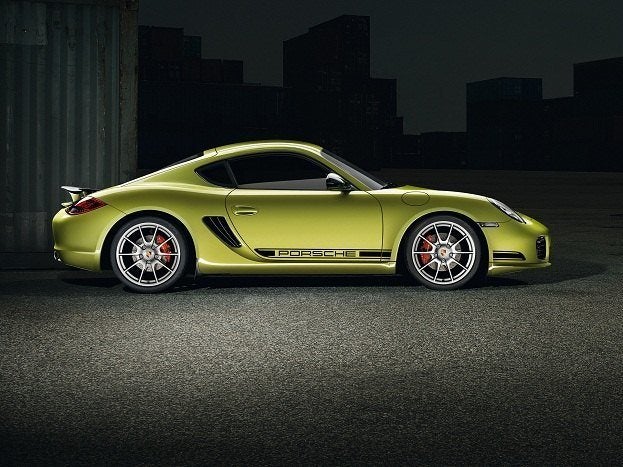 For premium car buyers who justify their new car purchases with the latest in convenience technology, the 2012 Porsche Cayman R jazzy, multi-colour interior is fueled by the outer performance desires. Notable absences inside the Porsche Cayman R is cup holder and the stereo system (though a premium audio system and a navigation computer can be optioned). The Cayman R’s sport bucket seats featuring carbon fiber backing and Alcantara construction is said by Porsche to have shaved 26 pounds from the vehicle’s total weight.

With all the weight-shaving attention, curb weight of the Porsche Cayman R is 2,855 pounds with a 6-speed manual or 2,910 fitted with the 7-speed, twin-clutch PDK transmission. In translation, this Cayman R model weighs less than a base Porsche Cayman.

Coupled with the aerodynamic enhancements, the power to the ground is left as the only ingredient in making the 2012 Porsche Cayman R a full package. Featuring a careful performance tweak of 10 horsepower to 330 with the 3.4 liter flat-6 engine, the Porsche Cayman R reduced overall weight pushes the car’s weight-to-power balance to just 8.58 pounds per horsepower. Launched with 273 foot-pounds of torque, acceleration and speed is given a healthy bump. The Porsche Cayman R strips two-tenths of a second off the Carrera S times with a 4.7 second 0-60 mile per hour time achievable with the manual. The PDK transmission paired with the optional Sport Chrono package moves at a lightning fast 4.4 seconds. Top speed of up to 175 miles per hour is on tap with the 2012 Cayman R edition.