Picking up the production-ready electric car in the 21st century almost exactly 100 years after the time automotive powertrain was last considered a viable product, auto makers are excitedly embracing the alternative to the internal combustion engine in efforts to win over the tech-savvy, eco crowd. The all-electric contingent within the next 2-year period includes the Nissan Leaf, an electric Ford Focus and Transit Connect as well as a possible entry from Honda. Joining these ranks in the United States will be Mitsubishi showing off their electric powerplant version of their i micro car.

For almost two years traveling on the North American auto show circuit, Mitsubishi i-MIEV unveils their production-based example (picture at top of page);a car which could soon be in your and your neighbour’s driveway. Premiering at the upcoming Los Angeles Auto Show opening to the public on November 19th, the all-electric Mitsubishi i-MIEV makes a preview ahead of its year end sales debut.

Beholding the Mitsubishi i-MIEV for the first time in American production form, astute onlookers of the concept car will note a more macro look to this micro car. In accommodating this micro Mitsubishi to the North American driving climate, reengineering of the Japanese-based i-MIEV required some enlargements to meet safety standards as well as the everyday differences of passengers on this continent. Lengthened by the near equivalent of a foot at 285 millimeters (11.22 inches), the increase distance from front to rear bumper is due largely to beefier bumpers required to meet US crash safety requirements. With only an incremental change to the overall height, the remaining dimension adjusted on this North American Mitsubishi i-MIEV is width. Stretched by 110 millimeters (4.33 inches) to an 1,585 millimeter overall width, the i-MIEV is said to be more comfortable for adult seating four.

Complying closely with the concept car previously shown, the Mitsubishi i-MIEV powertrain is already revealed. Slated to use a 47 kilowatt permanent magnet motor, a lithium-ion battery pack will supply 330 volts of circuit. Offering no official details on performance characteristics prior to exhibition in the Los Angeles Convention Center, it is uncertain if the increased mass of the North American Mitsubishi i-MIEV will retain travel range and speed of the Japanese or European versions. The specifications of the non-American model of the i-MIEV indicates a maximum speed of 130 kilometers per hour (under 81 MPH) with a top cruising range of 160 kilometers (99.5 miles). 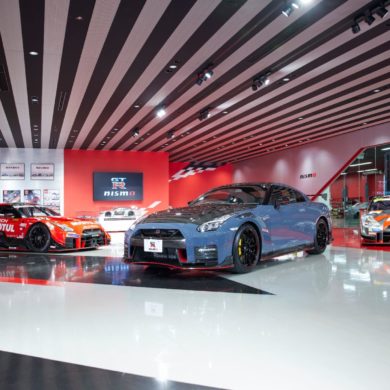