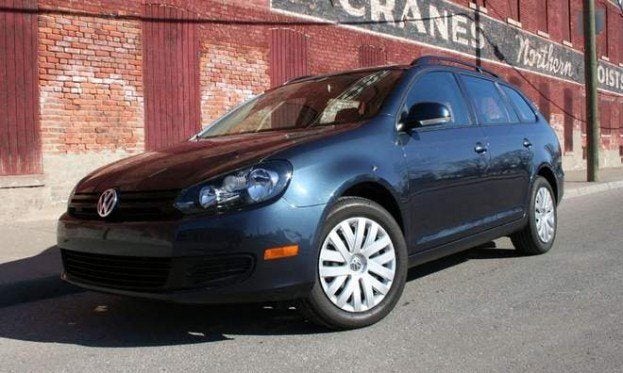 Growing up, there had always been a station wagon parked in the Borgia family garage. We went through a couple of Mercury Sables (bench front seat of course) as well as a handful of the wonderfully boxy Volvo 850 turbo wagons.

And I remember every one of them fondly. From being in control of the power radio antenna and being stuck in that horrendous rear-facing seat in our blue 1990 Sable to learning about torque steer and turbo boost on the 1997 850 GLT, I spent a lot of time in our wagons. They were great family companions that offered the best of both worlds for a busy family of four.

We also had sport-utilities as well, including several Jeeps and a Dodge Durango, but the wagons always stuck out to me as being more comfortable and more enjoyable to be in.

So it is always great to see a manufacturer still offering station wagons for those who value function over style. Although the number of wagons have diminished over the years because of SUVs and crossovers, Volkswagen is one of the few that still sticks with a dying breed. 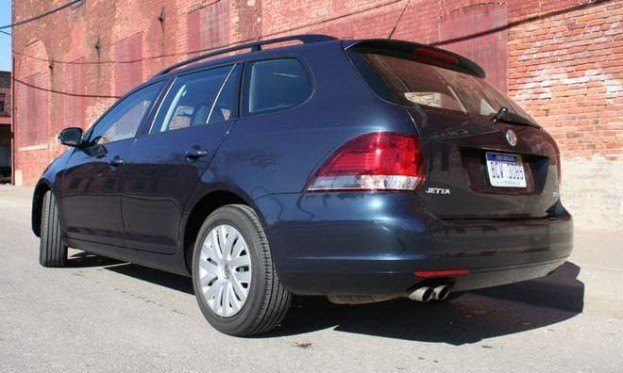 Volkswagen has always sold station wagons here in the states, from the smaller Jetta SportWagen to the mid-size Passat, both released in 2006. They have always offered the utility expected from wagons, but also threw in an appreciated fun-to-drive aspect. This has made them a popular choice among families who want German quality and performance.

What I have here is one of three Jetta wagon trims. The base form is called the ‘S’, while the uprated model is called the ‘SE’. There is also the TDI SportWagen, which is a wonderful turbo-diesel powered wagon Chris reviewed earlier this year.

Prices to get into the door of an S start at just $19,265, and that does provide a fair amount of equipment standard: power one-touch windows, locks and mirrors; power backrests; heated seats and mirrors; tilt/telescope wheel; CD stereo with an AUX-In for an MP3 player; and folding rear seat backs.

Inside, grippy cloth seats are the only seating surfaces available and offer good side and lumbar support. There is a three-spoke steering wheel for the driver with clear white-on-black gauges. To the right is the radio, which offered large buttons and knobs that are very easy to use. Down below are the same HVAC controls and heated seat buttons found in the Volkswagen GTI I reviewed earlier.

Overall, everything feels very well-made, just like all VWs have been. The dash is covered in a high-quality soft vinyl and plastics. The controls, minus the ventilation controls, feel substantial and have a wonderful tactile feel to them. With almost 92 cubic feet of interior space, there is a reasonably open and airy feeling. 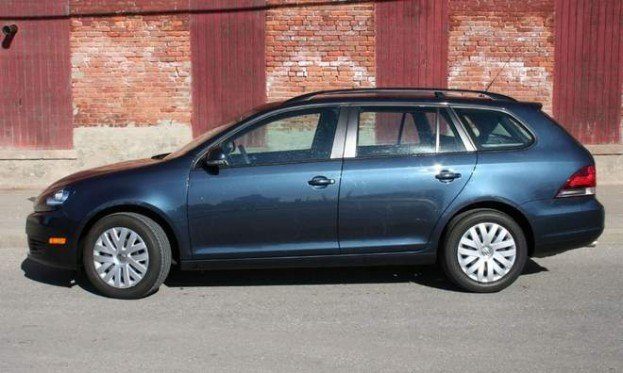 In the second row, there is a surprising amount of room for two full-size adults or three growing children. As current with Volkswagen going one-step above in their vehicles, rear occupants get a few luxury features, such as their own air vents in the back of the center console and their own door lock controls.

Inside the hatch, though, is where this car shines. Even with the rear seats up and sitting only 15 feet long, there is 32 cubic feet of space. Fold the second row down flat, and the cargo hold swells to 67 cubic feet. That’s larger than any hatchback and most crossovers that’s cost much more. And added to that is an under floor storage bin good for hiding things you really don’t want others to see.

On the outside, Volkswagen put a new face to the Sportwagen. Gone is the oversized, one-piece chrome grill. It’s been traded in for a more traditional two-piece front end. Along with a headlight redesign (they did keep the tiny VW badges on the low-beams), the front looks more aggressive as well as keeps the Volkswagen image intact. The back has reshaped taillamps and bumper. Other than that, it will look the same as before.

On the SportWagen S, buyers are relegated to simple hubcaps over 16-inch steel wheels and black window trim. However, the door handles and side mirror housings are color-matched as well as house turn signals in the bottom of each mirror. Also, roof rails are standard, an item usually having to be added on. 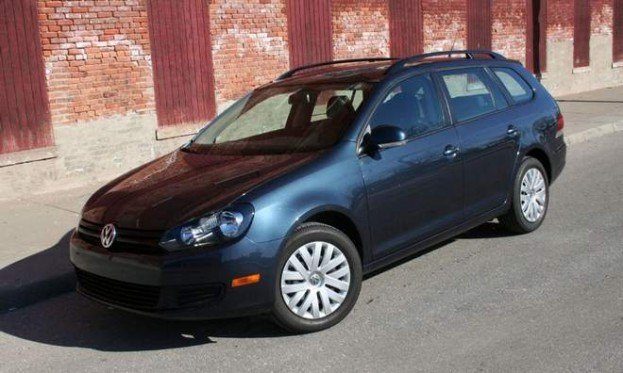 Underneath the hood is the only engine available, which is Volkswagen’s 2.5-liter, DOHC 5-cylinder engine. Incorporating a lot of top-end technology shared with the Lamborghini Gallardo’s 5.2-liter V10, the big engine produces 170 horsepower and 177 lb. ft of torque. The five-cylinder has plenty of power after 2,000 RPMs all the way to 6,000. And while other reviewers hate the engine note, I think it’s sounds wonderfully gruff and guttural. Most important, is with this larger engine, EPA still rates the car at 22/30 mpg on good old-fashioned 87 octane.

The six-speed automatic shifts smoothly and offers Tiptronic control and a Sport mode which keeps the transmission in lower gears and in the power range. The manual is pretty good, although the throws are not as precise as I would like. The clutch has a long travel, but has a linear pedal feel with a good engagement point.

Driving along in everyday life is quite pleasant. The ride rides smoothly over most road undulations. The electromechanical rack-and-pinion steering is weighted nicely with good feel and quick response. The car is very tossable, with strong disk brakes and a solid feel overall, although the suspension is a bit softer than I was expecting. Loaded with people, the car was comfortable and had no problem accelerating or maneuvering through traffic. My test car, with the only option being Bluetooth Handsfree, cost $20,214. That may not be bad considering the room and quality you get, and considering there is no real competitor in this class size, it’s a bargain for a wagon. However, my biggest complaint is that for $20,000, a buyer can give up a bit of room and get loads more equipment (things like alloy wheels and a wonderful panoramic roof are a few of the options available) in something like a Mazda3 or Toyota Matrix hatchback.

If you want the most room with few amenities, this entry-level Jetta SportWagen is a good value. Lots of room and good drivability for a somewhat reasonable price in limited market makes it seems like it’s a bargain considering other wagons cost a lot more. If the desire to have more equipment and features, buyers will want to upgrade to an Jetta SE. Because for about $4000 more, the SE offers a touchscreen radio with Sirius, upgraded seating surfaces, alloy wheels and available navigation.

For Volkswagen to continue to make wagons in this long-run of raised crossovers is impressive and a welcome note that old ideas still work in today’s world.