Sporting a 2010 line-up of six distinct model nameplates, Porsche dealerships is rapidly turning into a sports car fan’s Baskin Robbins. While a crossover sport utility vehicle (SUV) and most recently a four-door were radical additions to the German sports car maker’s vehicle catalog, the perennial and iconic Porsche 911 has grown to showcase a wide assortment of performance driving. For 2011, a new mid-line Porsche 911 Carrera GTS (priced between $103,100 to $112,900 US)  bridges a gap between the base Carrera and the more tricked out Porsches such as the 911 GT3 or 911 RS models.

Porsche’s GTS designation for their new 911 trim comes as recognition for the 1964 championship-winning sports car, the Porsche 904 Carrera GTS. Though returning to a Porsche sports car for the first time since 1964, the first generation Porsche Cayenne also applied the GTS moniker to their aerodynamically-tweaked crossover sport utility vehicle. In the new Porsche 911 Carrera GTS, performance and luxury comfort merge into a rather exciting German rear-engined car.

Recognized as a beautiful race car, the original 1960s Porsche Carrera GTS was also renowned for its hasty construction. In a rush to build enough cars to qualify the sports car for the 1964 European 2-liter championship the Porsche 904 Carrera GTS featured fiberglass panels were glued over top of the steel structure. With only 106 of those 1964 Porsche 904 Carrera GTS’ built, the poor manufacturing led to corrosion prematurely attacking many of these speed creations.

In contrast, the 2011 Carrera GTS wears the rock-solid 997 construction provides an ideal base for resurrecting the GTS nameplate on a Porsche sports car. Coming in both coupe and convertible variation, the body style is that of the Porsche 911 Carrera 4 which includes the increased rear track of 1.73 inches. Being a rear-wheel drive Porsche, this is the only Carrera model to get this extra wide rear wheel track without an all-wheel drive system. Given a SportDesign-sourced front apron, the Porsche 911 Carrera GTS exterior look is distinguished further by black side skirts and 19-inch RS Spyder wheels also wear black paint with only a careful chrome outline. 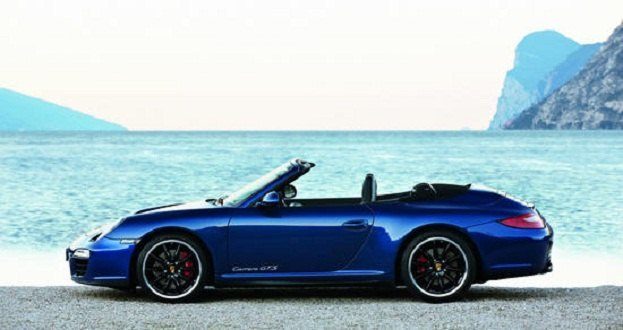 Taking place as the top-of-the-line Porsche 911 Carrera in 2011, the interior has been touched with a generous amount of Alcantara material found on the seats as well as the steering wheel and shifter lever. Not only a high-grade material, the Alcantara placement on the steering wheel and levers are to supply the driver a race car sensation. Just as Carrera GTS’s outer theme plays heavily on the dark, concealing black, the colour is also prominently used over the interior.

With power processed through a six-speed manual gearbox, the trip from a standstill to 60 miles per hour (MPH) can be accomplished in 4.4 seconds with a top speed of 190 MPH presiding at the Porsche’s limits. Alternatively, Porsche Doppelkupplung (PDK) 7-speed dual-clutch transmission can also be mated with the 3.8 liter flat-6 engine. Taking two-tenths of a second off the 0 to 60 MPH instantly with the transmission compared to the manual-equipped Carerra GTS, a 4-second flat time can be achieve when opting for the available Sports Chrono Package Plus. The PDK gearbox is also capable of better fuel economy on the Carrera GTS delivering 1 mile per gallon more on average. Porsche’s PDK has only downside as top speed dips slightly to 188 MPH.

In one simple question coming to mind after witnessing the Porsche 911 Carrera GT3, we must ask the following: Can there ever be enough versions of the Porsche 911? Well, the answer is just even simpler to utter than that question. Of course not!