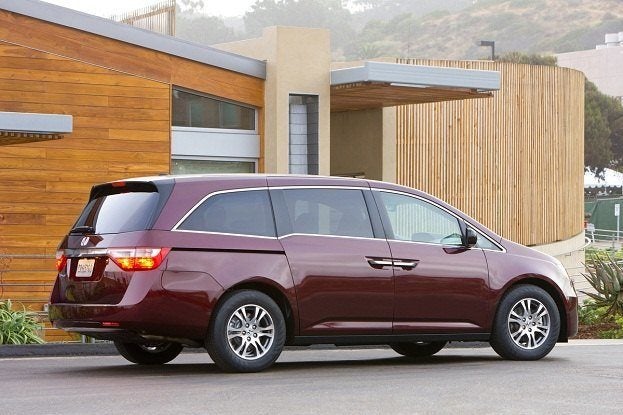 After amusing yourselves with the sights of the world’s most powerful sports cars, grappling the uncharted trails of a crossover/sport utility vehicle or immersing in European luxury, the suburban minivan is not likely a dream car.

Since the 1990s, the minivans have grown consistently larger with each generation theoretically playing against the directives of the vehicle segment. In fact, current minivans now dwarf the early Ford Econolines. Providing no exception to the ‘maxivan’ minivans, the new Honda Odyssey spreads out a little more for 2011. Though some speculation had planned for the minivan market to expect the 2011 Honda Odyssey’s length would be reduced over the 2010 model, the final production product has actually stretched the new minivan. At 202.9 inches, the 2011 Odyssey’s length is slightly increased by 0.8 inches. True to predictions, width of the Odyssey minivan grew by 2.1 inches making it the widest vehicle in class.

Constructed with the extensive use of high-strength steel, the 2011 Honda Odyssey is stronger suited for better rigidity and safety. Combined with Honda’s ACE (Advance Compatibility Engineering) body structure the Odyssey enhanced protection in rollover and side-impact accidents is a strong selling point for the safety-minded family market attracted most to minivans. The grille and headlamp design coordinates with the Honda Crosstour and CR-V as confident front end. Despite some minor side styling which includes cheeky upper door contours, there’s no escaping the fact the Odyssey is less exciting than some of the crossover vehicles. However, it’s worth admitting that minivans are often bought for what’s inside.

Featuring a total interior volume of 172.6 cubic feet on the entry-level Odyssey LX, the airy cabin is the perfect family transport for long rides. Passenger capacity of the 2011 Honda Odyssey rates as 7 for the LX model or 8 for trim levels EX and above with the option of converting 2nd and 3rd row seating into additional cargo space. Accompaniments for the interior include power windows and door locks, air conditioning (Odyssey models EX and higher feature three-zone climate controls) as well as an MP3-compatible CD stereo system. EX-L as well as the Touring models up the ante with leather seating, heated seats and XM Satellite radio. Of course, Homer Simpson’s beloved coin holder returns to the Odyssey. 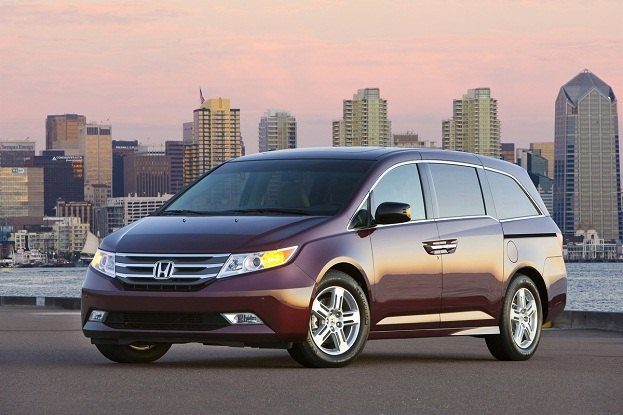 Freshed on the outside as well as in the cabin, engine power of the 2011 Honda Odyssey relies on the tried and true 3.5 liter aluminum i-VTEC V-6 from the predecessor. For 2011, a mild power increase was induced into the Odyssey engine with 248 horsepower and 250 pounds feet of torque on tap. While all Honda Odysseys will be equipped with single-overhead cam i-VTEC V-6 engines, a transaxle choice is available deeper down the powertrain as Honda buyers. With the 5-speed automatic still in the fold from 2010, the new Odyssey van trimmed in Touring and Touring Elite specifications will be fitted with a new 6-speed automatic.

Unlike the Toyota and Nissan counterparts, the Honda Odyssey’s engine is perfected to use regular gasoline. As Premium gasoline price differs on a National average of 17.6 cents as of mid September compared to regular fuel, the Honda Odyssey saves a family $167.62 a year (considering 20,000 miles with fuel economy landing on the Odyssey’s combined number).

When it comes to buying an affordable vehicle providing up to three-rows of passenger seating, the Honda Odyssey is still a reasonable choice in 2011. As base pricing of the Odyssey LX lands at $27,800 US, be aware that the price tag does escalate to $43,250 for the Touring Elite model.

Previous
Audi TT RS Speeds for the US Next Year 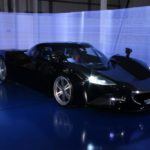