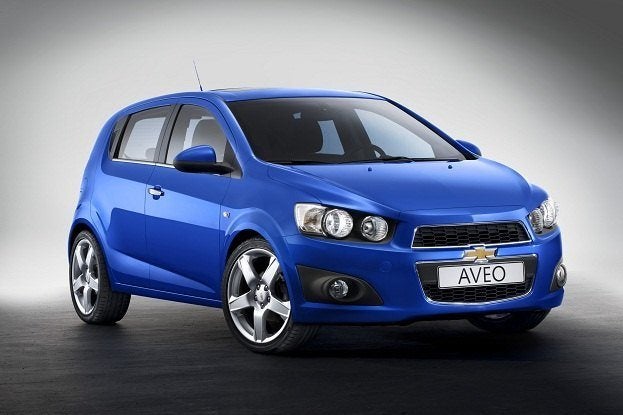 Suiting up an unexciting Daewoo product with Chevrolet badges, the Aveo was brought to North America as a bargain-centered vehicle in 2004 model year. In typical classic General Motors fashion, their devotion to small cars resembled a phoned-in effort. The Chevrolet Aveo’s shortcomings have become most evident as the B-Segment small car category has exploded in the United States bringing the Nissan Versa, Honda Fit and most recently the Ford Fiesta to our roads. Ahead of the 2010 Paris Motor Show scheduled to open September 30th, a new look Aveo production hatchback model is angling to place a massive foothold in the small car class.

Built using the greater attention of detail instrumental in engineering the Chevrolet Cruze, the new Aveo offers improved rigidity over the previous design. With a tougher structural package, the Chevrolet Aveo asserts a more aggressive appearance departing from the econobox styling. A close resemblance to the Chevy Aveo RS concept car, the new production Chevy Aveo announces itself first with an intimidating looking front-end brow. The dual-headlamp configuration provides a soulful clarity which many new sports and luxury cars are eagerly adopting. Advertising itself as a “hot-hatch look”, the new Aveo side casts forward-leaning angular body lines. Artificially creating an illusion of two-door, the Aveo hatchback’s rear door handles are incorporated into the C-pillar. With a larger base to organize a new interior, Chevrolet states that the new Aveo hatchback will feature cargo capacity among the class leading vehicles. The new interior touts several handy storage spaces as well as an audio system equipped with USB and MP3 inputs. As the driver sets himself behind the steering wheel, a racy gauge cluster is said to be “motorcycle-inspired”. Compiled in a style similar to the instrument layout exhibited on the Aveo RS concept, an analog gauge tachometer is coupled with a digital speedometer readout.

The stiffened structure of the new Chevy Aveo promotes a more responsive and better handling ride. Standard features such as electronic power steering, electronic stability control and anti-lock braking are all appreciated safety aids on a smaller car. While European markets will be bracing for as many as 6 engine options (including two diesel powerplants), North American car buyers should at least expect the return of the 1.6 liter double overhead cam 4-cylinder. Continuing to employ variable valve timing and cam phasing for easy power delivery, there will be a power bump of 7 horses taking the engine strength to 115 horsepower in total. The new Aveo will offer another more prominent note of excitement as a 6-speed manual transaxle can be opted for an interactive driving feel. Preferring a drive with less involvement, Chevrolet is also adding a 6-speed automatic gearbox.

Slated to arrive in North America in 2011 as a 2012 model, the new Chevrolet Aveo hatchback should also be joined by a sedan variant.