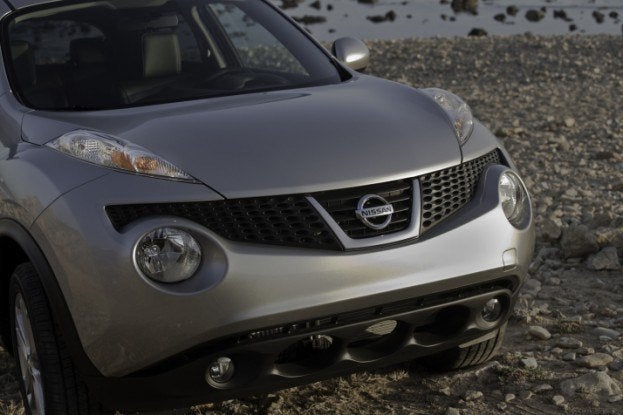 Nissan has been actively creating some strange interpretation in defining the modern crossover vehicle. However, with every crossover, Nissan demonstrates strangeness is not exactly a bad thing.

Started with the Nissan Murano arched look in 2003, the Japanese-based auto company followed this up in 2008 developing the equally as striking but smaller Rogue as an under $25,000 companion to the Murano. This year, Nissan brought the convenient compact Cube to the North American marketplace judged bold or bizarre depending on the eyes of a beholder. Nissan promises another radical creation for United States roadways when the Nissan JUKE makes its 2011 model year arrival.

So, what exactly is a JUKE? Prior to Nissan’s adaptation of the name, the word has been deeply connected through musical origins. Referred to in blues as well as electronic music circles, Juke was known for blending styles and trends into a unique arrangement. Advertised by Nissan as a sport cross vehicle, the 2011 JUKE’s styling is said to combine aspects of crossover and hatchbacks. A shapely but tall overall design, there is no mistaking the Nissan JUKE stands out from the crowd. Prevalent fender flares profoundly add dimension to the 162.4-inch long structure of the JUKE which perception of size is greater manipulated by the standard 17-inch wheels. Chevron-shaped taillights surround the rear lift gate echoes the aesthetics of the high-performance Nissan 370Z. The front end headlights flowing up the top of the hood line actually appears reminiscent to the lighting on the Pontiac Aztec (It’s interesting to note how many design cues from the widely-criticized crossover pioneer is integrating into lauded new vehicles). Nonetheless, the 2011 Nissan JUKE pulls off an original composition of outer styling.

Much like the Nissan Cube and Versa, space inside the JUKE is optimized efficiently for five-passenger seating. A considerable cargo space can also be obtained thanks to the 60/40 split rear seats which conveniently folds flat into the floor. On front-wheel drive JUKE vehicles, cargo storage space will be present in a rear floor compartment. In a list of standard features, items like Bluetooth connectivity, an iPod-ready stereo system and a 4 interior cup holders are present. Interior controls inside the Nissan JUKE are based from the auto maker’s Integrated Control system or I-CON. Climate control can be carefully monitored with air flow adjustable throughout the vehicle. 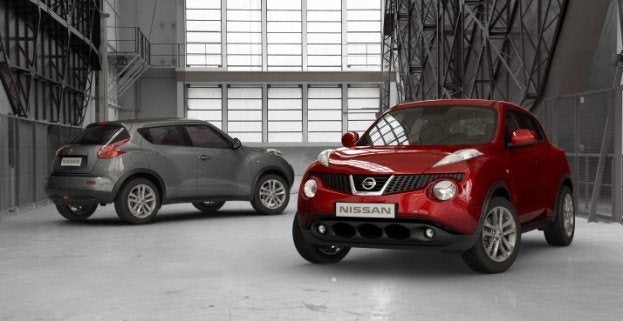 Playing within a small space, this did not stop the Nissan and Renault engineers from building a solid performer even fitting an optional all-wheel drivetrain into the 2011 JUKE. Using the forced-air induction of a turbocharger along with direct injection, the modest 1.6 liter engine pumps out a not-so mild-mannered 180 horsepower and 170 pounds-feet of torque. Priced higher than the Suzuki SX4 (currently the lowest priced all-wheel drive vehicle on the market), the all-wheel drive Nissan JUKE models will be seated within a smaller vehicle footprint than the Japanese rival. With all Nissan JUKEs equipped with a Continuously-Variable Transmission (CVT), front wheel drive version will add an optional 6-speed manual transmission for the SV and SL models of the JUKE. For all 2011 Nissan JUKE models, the I-CON system features a D-Mode where the drivers can select their ideal driving situation.

When accounting for fuel mileage, the JUKE reigns above the 25 mile per gallon plateau. In fact, the CVT-fitted JUKE FWD delivers an average 29.5 miles per gallon. The sports-catered 6-speed as well as the all-wheel drive Nissan JUKEs still coasts with 27.5 miles for every gallon of gasoline.

While the Nissan JUKE is an individualized piece of motoring design, the sport cross enters showrooms at an approachable price starting at $18,960 for the front-wheel drive S model. At the highest end, the JUKE SL AWD is priced at $24,550. Alarmingly within the window of the Nissan Rogue, the JUKE is being targeted for a younger more free-minded customer compared to the Rogue’s appeal to young families.