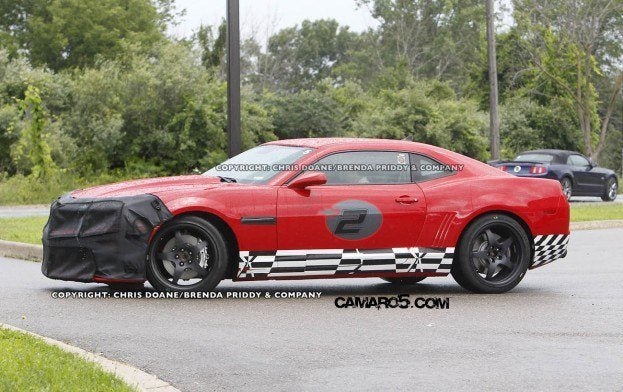 The high-performance pony car rekindling of energy into the second decade of the 21st century shows how motorists are not ready to abandon high-performance V-8s for plug-in electric hybrids just yet. More than a year since the relaunch of the Chevrolet Camaro, it’s safe to say General Motors’ newest incarnation of the pony car was a runaway success. Selling 98,872 units in a 12-month period between May 2009 to May 2010, the Camaro stands as the golden boy of the American automotive company’s rebound.

Earning a power boost for 2011 models, the future of the Camaro looks forward to an old friend rejoining the performance band. Beyond the base Camaro and the high-powered SS model, Bowtie watchers were eagerly awaiting the return of the Camaro Z-28. Thanks to spy shot images featured on the website camaro5.com, the existence of the Z-28 is confirmed.

According the camaro5.com, rumours have Chevrolet fitting the supercharged 6.2 liter V-8 powerplant. Even though the Chevrolet Corvette ZR-1 employs the LS9 engine meeting the criteria for being a 6.2 liter supercharged unit, the chances of Chevy throwing a 638 horsepower powerplant into a Camaro Z-28 is near zero. A more rational choice for the division would be the LSA V-8 engine which is currently found inside the Cadillac CTS-V cars. With indications that the Camaro Z-28 tester was equipped with a 6-speed automatic transmission (the same gearbox choice routing horsepower on the mid-sized Cadillac), it seems to add credence to the LSA engine being chosen for production. Possessing a smaller blower than the LS9 powerplant, the LSA V-8 is pumping a still pavement-peeling 556 horsepower.

Wrapped around the probable Z-28 engine, the Camaro test car covers the powerplant with a prominent hood bulge with a larger cowling. Wearing Goodyear Eagle F1 tires around 20 inch wheels which do not appear to be of factory origin, the lack of apparent exterior styling changes on Z-28 Camaro might be a street sleeper. There is also a chance that the car itself is simply what is known as a test mule (a mundane vehicle with no design enhancements built to develop drivetrain and other hidden components).

Originating as an equipment package designed to enhance handling of the 1967 Chevrolet Camaro for SCCA Trans-Am racing, the Z-28 name was not immediately associated as a high-output machine. Meeting Trans-Am specifications for limited engine size, the smaller displacement 302 cubic inch V-8 engine which was design-suited to racing. The Chevrolet Camaro would not identify the Z-28 as the high-performing engine choice until 1973 after the Camaro SS was phased out due to emissions choking horsepower. While the SS version was reintroduced into the late 1990s, the Camaro Z-28 was favoured long afterward as the V-8 muscle up until the time Chevrolet pulled the plug on the pony car. Fixing one mistake, Chevy’s commitment to bring back the Z-28 is certainly righting another wrong.

Still tight-lipped on their Z-28 version of the Chevy Camaro, General Motors has also offered no official clue on when production start is expected for the supercharged pony car. In earlier speculation, GM executives stated the new Chevrolet Camaro Z-28 as a 2012 model year with availability set for late 2011.