Lamborghini Concept EV – A Novel Approach to an Electric Supercar

Electric cars aren’t reserved for boutique car makers and fuel efficient compacts – every car manufacturer out there is currently looking at alternative fuel methods. Even Ferrari developed a prototype hybrid technology called HY-KERS that they’re considering putting into the 599 Fiorano (please don’t, Ferrari.) Audi has the e-tron electric lineup based on the R8. After all, electric motors are good at giving GOBS of torque at very low speeds, so why not take advantage of it?

Well, for starters, there’s the extremely high weight that batteries and electric motors weigh, hindering performance. Then there’s the predictable short range and lack of infrastructure in place. And of course in any supercar, the exhaust note helps sculpt the driving experience. None of that in an electric – just a faint whirring sound. Could you imagine driving a Ferrari without a screaming V8 behind your head?

Designer Flavio Adriani attempts to overcome some of the EV shortcomings with his new Lamborghini Concept EV – a car he designed to prove a supercar can be eco-friendly and give the same benefits a gus-guzzling performance car will.

Looking at the renderings he’s created, I can see he pulled inspiration for nearly every Lambo on the market to mold it into a modern interpretation. The Gallardo is the primary influence, with a Diablo/Murcielago flowing roofline and engine bay cover. Looking at it from the side you can also spot a bit of Countach thrown in there. It definitely looks like a modern-day, aggressive Lamborghini.

Similar to the Audi e-tron, the Lambo Concept EV has four electric motors, one on each wheel for precision handling. The slotted engine cover serves as a solar panel to help charge the batteries, though I imagine with current solar technology it will only be as good as a trickle-charge. Flavio also fitted the car with a panel to block the passengers and driver from low-frequency radiation common in cell phones, antennas and other wireless devices.

One of the biggest complaints of electric cars – no engine sound – has also been considered. We’ve all seen the cheesy fake engine sound speakers, but there’s none of that here. Instead, Flavio took a unique approach and fitted the concept with air turbines to mimic the sound of jet engines. Yeah, that’s interesting. The problem to overcome there, of course, is aero drag, but if he integrates the turbines to do something functional, say, act as a cooling system and regenerator, it might actually work. And sound cool.

What do you think about the Lamborghini Concept EV? Is there room in the supercar world for electric propulsion, or should we stick with good ol’ petrol?

Take a look below at a breakdown of the car (click image to enlarge) and be sure to visit official page for more info and pictures. 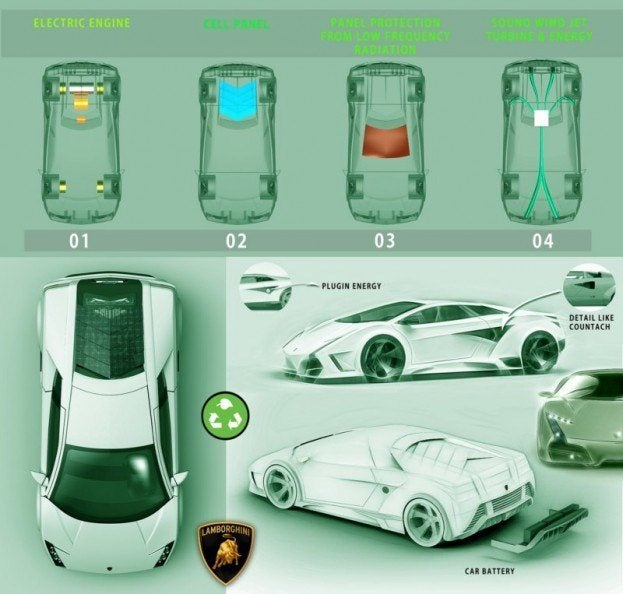 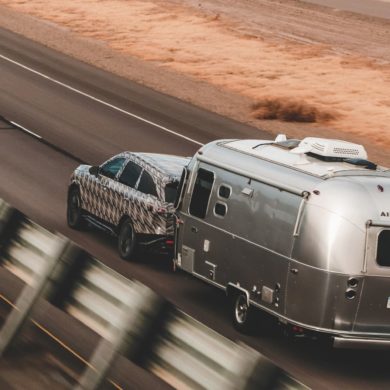