25 Years After Going Back to the Future; the DeLorean DMC-12 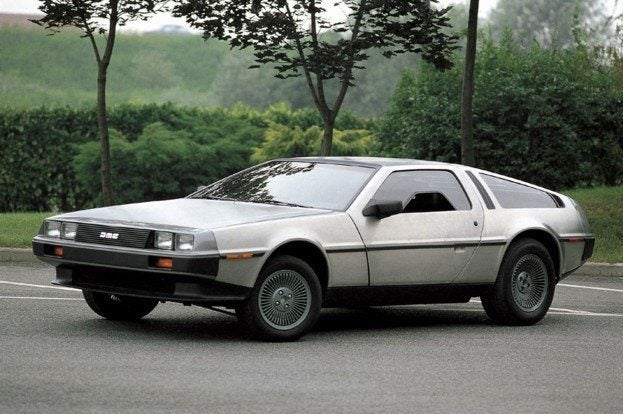 On precisely July 3rd 2010, the movie Back to the Future turn celebrate 25 years since its debut to American audiences. The Steven Spielberg movie which spanned into a trilogy turned into a blockbuster and cultural icon featuring Michael J. Fox as a teenager Marty McFly who unwitting sent on a time-traveling adventure starting in 1955. Aided by eccentric but good-natured scientist Dr. Emmett Brown (known as Doc), their vessel of choice through this their journey in time was a modified DeLorean DMC-12. Selected by the Doc simply because he wanted a time machine to have some style, the DeLorean traveled through the four different eras of time of the fictional Hill Valley (not including the alternative 1985 which saw arch rival Biff Tannen operating as criminal overlord of a so-called Hell Valley). Lighting up the scenery like a Christmas tree, the DeLorean time machine now has a silver anniversary to accompany the stainless steel body.

Immortalized as the time machine in Back to the Future, the story of the actual DeLorean Motor Company contains scenes suitable for an R-rated movie. Founded by John DeLorean, this was the popular executive who steered Pontiac through the 1960s. Under DeLorean’s reign, the GTO and Firebird were born into reality giving the Pontiac division what would arguably prove to be the brand’s last, great years. First turning his sports car dreams into a business in 1976, DeLorean envisioned a cutting-edge rotary engine performance car. Hiring noted Italian designer Giorgetto Giugiaro, John DeLoreans’ image of a stainless steel bodied sports car started off promising.The famous gull-wing doors, while being a charming character touch, was also designed so taller people like DeLorean (who stood 6 foot, 4 inches) could more easily enter and exit the vehicle.

But while styling was captured, the former General Motors boss would concede much of first original ideas over three years of design development giving up on the rotary engine technology as well as an exotic, patented materials for chassis construction. Because of the more radical initial plans for the DeLorean car, Lotus sports car magnate Colin Chapman was brought in to engineer a more conventional sports car chassis.

The end result is a DMC-12 which failed to meet performance expectations. Cited as the leading problem would be the PRV (Peugeot-Renault-Volvo) powerplant DeLorean elected to use. A 130 horsepower engine deeply injured the speed potential of the DMC-12. Amounting to a 10-plus second 0-60 mile per hour acceleration time, the DeLorean time machine barely had enough spunk to outrun a Volkswagen Microbus in a California mall parking lot. In fact, Marty owed his live to the flux capacitor as the vehicle time jump at 88 miles per hour. Power challenged, the engine was also a problem area within the production of the Back to he Future trilogy as it repeatedly overheated during production of the first film. Through part 2 and 3, an air-cooled Porsche powerplant was fitted within the DMC-12 engine bay.

In the movies, the time machine DeLorean’s fate would be met shortly after bringing Marty back home to 1985 as a freight train tore through the stainless modified sports car. The DeLorean Motor Company’s ending is slower but comparably as dramatic. Following a two-year delay at the Belfast, Ireland manufacturing facility as financial problems immediately threatened DeLorean, The British government invested an equivalent to $160 million to insure cars would leave the factory in 1981. Surviving two turbulent years of production, selling the high-priced car within a recession, DeLorean Motor Company ceased after 9,200 DMC-12s were built. Concurring, company founder John DeLorean was tried on drug trafficking charges which he would be acquitted on after trial.

An belated Hollywood ending, the DeLorean DMC-12’s co-starring role in Back to the Future 25 years ago allowed the stainless steel to glimmer a little more brightly considering its troubled infancy. Then again, the comeback story is always a favourite.

In other news, as an automotive correspondent, it is may regret to report the following news. It seems that the hover car conversion kits, shown in the second movie of the Back to the Future trilogy, might not be ready before or on the year 2015.