Could the Mercedes SLS AMG Really be Based on a…Dodge? 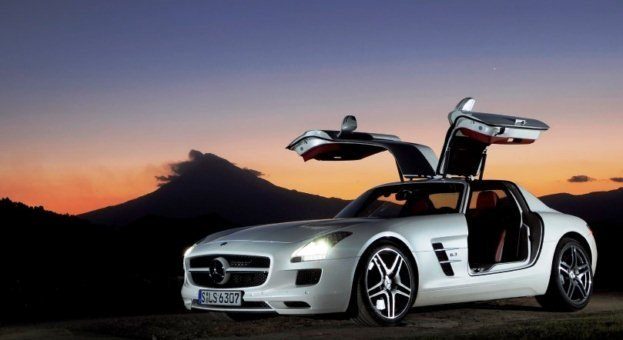 The Mercedes SLS is one of those cars that’s undeniably cool. It’s got “gullwing” doors, 562 horsepower, and room for your golf clubs.

Think of the SLS AMG as a reincarnated 300SL. It’s got the same gullwing doors. And, the design is remarkably similar, both inside, and out.

Where the two cars differ is under the hood. The 300SL was powered by…a light summer rain. The SLS AMG on the other hand, is powered by a Category 5 hurricane.

“Hurricane Benz” gets its power from an all aluminum, 6.2-liter V8. This powerplant is built by Mercedes’ in-house tuner, AMG. So, you know it’ll boogie.

But, the most interesting thing about this supercar is, the SLS is the first car to be built entirely by AMG.

That’s all well and good. But, according to Edmund’s Inside Line, anonymous sources claim that the SLS AMG’s aluminum chassis actually came from the forthcoming 2012 Dodge Viper…not AMG.

The story goes; Dodge engineers had already designed an aluminum chassis and suspension for the next generation Dodge Viper. When Mercedes learned of the new chassis design, they decided to use it for their upcoming SLS supercar.

At the time, Dodge was owned by Mercedes. And since the two companies had already collaborated on several chassis designs, the idea of a shared supercar chassis seems entirely plausible.

Previous
Chrysler Connects with Smartphone Future
Next
Why do the Europeans get all the cool toys?
Press ESC to close
Car Tech Concept Cars Modified Cars Electric Vehicles Future Driving