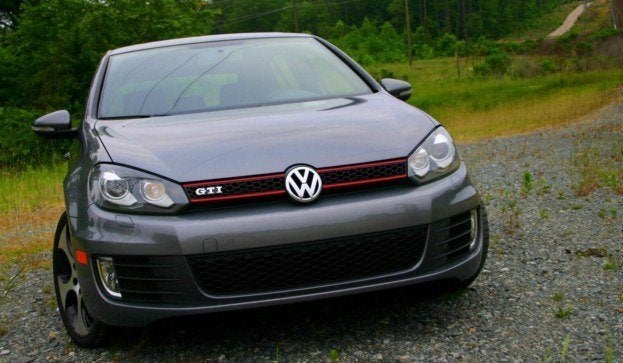 If you’re a car enthusiast and you’ve never attended an Autocross event, you’re missing out. If you’re not familiar, autocross is a low-speed solo motorsport event where you can literally bring almost any vehicle and compete. It’s the most inexpensive way to get into motorsports (generally $20-$35 for a day,) and focuses on car control and handling more than power and speed. At a given event you’ll find lots of little roadsters (Honda S2000, Mazda Miata) as well as high-powered musclecars, family sedans, fully-built race cars, and everything in between. The track is usually in a big parking lot or airstrip, and is marked off by road cones.

Last week VW dropped off the new 2010 GTI for us to review, and there just happened to be an SCCA autocross going on. Given the GTI’s quick, nimble, pocket-rocket status, how could I refuse? Seeing as how it’s only my second autocross, I registered as Novice, pitting myself up against cars like the Nissan 350Z, new Camaro, and Subaru Impreza. 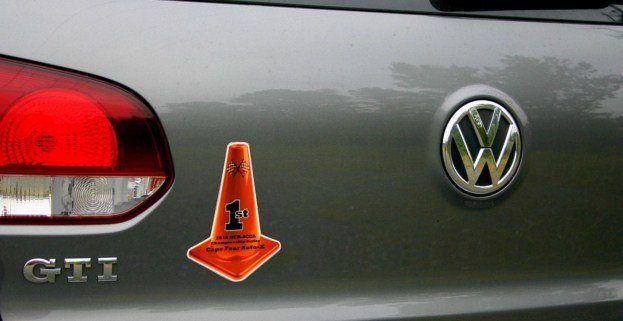 See that orange cone magnet attached to the car? Yup, that’s a first place trophy, baby. I can’t take all the credit though – the GTI was a great car on this windy course. Part of the credit goes to the high-winding 2.0-liter turbocharged four-banger under the hood. It may only produce 200 hp and 207 lb-ft of torque, but those 207 lb-ft are distributed across a wide band, allowing for even acceleration. My main problem here, however, was the turbo lag. Almost unnoticeable during normal driving, but start to drive aggressively and you notice it immediately. Annoying to deal with when coming out of corners hard, but once you acclimate you’ll find yourself able to control it without completely roasting the tires. Handling is spot-on, with tight steering response and a firm suspension. Normal everyday driving might get a bit bumpy at times, partially because of the oversized (but sexy) 18-inch wheels, though it’s far from a deal-breaker.

The 2.0T engine in the 2010 GTI comes standard mated with a six-speed manual transmission, which I found to be incredibly smooth and easy to drive. Our test car, on the other hand, was equipped with VW’s beloved six-speed DSG gearbox. Now here’s where you’d normally hear me going on about how much better the manual is and how stupid you’d have to be to get the automatic…but not in this case. As good as the manual is in this car, I can completely relate with wanting to get the DSG. No, you still don’t get the same driver-car connection as you do in the manual, but the DSG makes a lot of sense. First of all, it provides a great launch mode, which I used on each run. To launch, engage manual or sport mode, turn off traction control, put your left foot on the brake and floor the throttle. It will hold revs at about 3000 RPM until you release the brake, controlling wheelspin for the fastest launch possible. The DSG’s sport mode is also good about not shifting too early, although manual mode does still shift for you. Shifts are very quick, thanks to the dual-clutch setup. On the reasonable side of things, the DSG provides significantly better fuel economy than the manual tranny, which is odd. The stick gets you 21 mpg in the city, 31 on the highway, while the automatic yields 24/32 mpg. 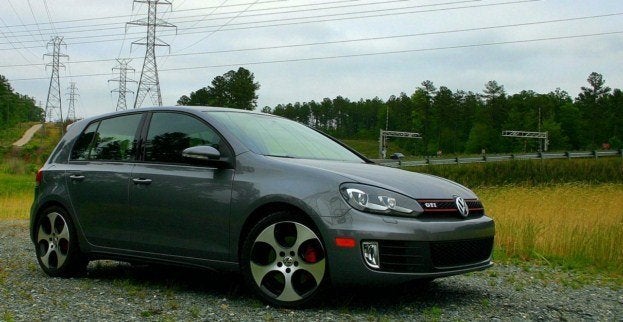 Speaking of driving this thing every day, VW has you covered there too. Out of all the new “hot hatches” I’ve driven, the 2010 GTI trumps them in terms of refinement and overall driveability. Given, the GTI has considerably less power than its competitors (200 hp vs. 265-ish in the Mazdaspeed3 and Subaru WRX,) but there’s also a lot less torque steer and less of a “squirrely” attitude about it than the Speed3 and other FWD competition; it’s more balanced and well-mannered. In reality, it feels like it has more than 200 hp, likely thanks to the even torque band. The interior in the GTI may have well come out of an Audi – comfortable seats, high quality materials in a well-designed interior, logical controls, and a very cool sport steering wheel. Attractive dark trim with tasteful chrome accents, red stitching on the shift and e-brake boot and steering wheel, a nice driver information display between the attractive gauges, and a really nice touch-screen navigation system.

So nice, in fact, the navigation system on the GTI deserves a paragraph of its own. The touch screen GPS, a $1750 option, adds a 30GB hard drive to integrate nav, phone, CD and MP3 data. What’s special about this navigation system in particular is that not only is it easy to use (a rarity with factory nav setups,) but it allows you to use it while the car is moving. “But that’s a safety feature!” you might be exclaiming. Right, but a really stupid one. By completely disabling any navigation input while moving, which most factory systems do, they’re not letting your passenger use it either. VW’s setup gives you an “it’s dangerous to input data while moving” warning, then lets you get to it. Also, while most factory nav systems make you go through a series of settings menus to turn on and off night mode (invariably none of the automatic settings ever work,) the VW system has a single physical button to swap between the two. 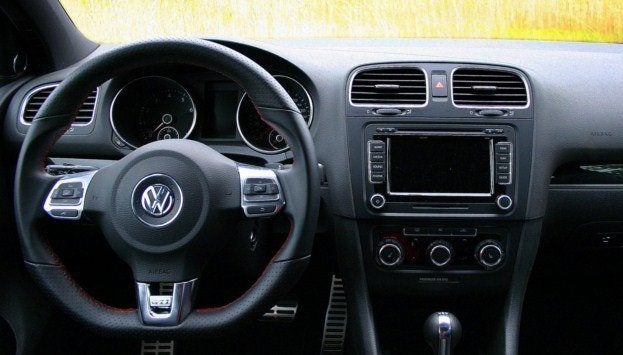 So, it’s obvious I like the car, right? Quite a lot, actually, and the more I drive it, the more I like it. What really impresses me with the 2010 GTI is VW’s attention to details. The audio inputs include both an iPod connector and standard auxiliary jack – something most manufacturers overlook. Another nice detail is as simple as unlocking the doors – press the unlock button once and all doors unlock, not just the driver’s. Unfortunately, you have to press the unlock button every time you want in, even after just getting out, because the doors lock themselves automatically all the time. Very annoying. 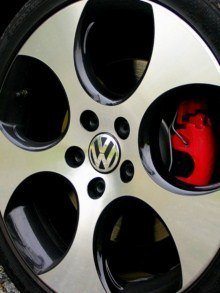 Another great detail – manual climate controls. To adjust climate: choose the temperature you want with one knob, how hard you want it to blow with the second knob, and where you want it to blow with the third. That’s it. None of this confusing programmable automatic climate BS that takes five minutes just to blow cold air. Another often overlooked detail – the seatbelt connector is raised slightly so bigger fellas like me don’t have to awkwardly contort ourselves to put on the seatbelt. Finally, the front sport seats (part of the Autobahn package) are manual forward and backward, power tilting. I’ve always thought car should be like this – power tilting lets you to more easily adjust your leaning angle but the power front/back adjustments take forever when you’re a tall driver – plus it reduces weight, which is always a good thing. Even the exhaust note sounds surprisingly good for a small engine. Little details like that are what would make me buy a car, and the GTI has definitely moved up on my list of possible purchases.

For 2010, they completely redesigned the car inside and out. We already talked about the beautiful interior, but the exterior deserves some attention too. The new styling is definitely an improvement, and makes the car look more aggressive and performance-oriented. The signature GTI double-red stripes on the front grille look great, especially in white (and I don’t normally like white.) My only complaint is that I wish the 2010 VW GTI were available in more exciting colors. Four of the six possible colors are monochromatic, the red doesn’t look very good, and the dark blue is boring. Optional 18-inch “Detroit” wheels, which you can see in the picture there, look incredible. If I’m not mistaken, they’re based off of the 642 hp VW GTI W12 Concept’s wheels from a while back.

Would I buy this car? Hell yes I’d buy this car. Starting at $23,664 for the 2-door hatch and $24,269 for the four-door, the 2010 VW GTI is a helluva value for the combination of performance, looks, refinement, and cool-factor. Plus, now it holds a special place in my heart for winning me first place at the autocross. Also be sure to look at the 2010 MazdaSpeed3 – it’s faster, wilder, and more all-out fun but less refined and poised. The Mitsubishi Lancer Ralliart Sportback is another competitor, and even the MINI Cooper is an alternative. Also be sure to check out the Subaru WRX if you’re looking for more power and AWD. If it were me – it would be between the STI and Speed3. 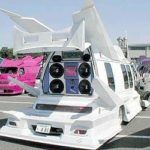