So, Where is GM’s Fuel Cell-Powered Car?

Hydrogen power was all the rage last decade as the thought that the most plentiful substance on Earth could be harnessed as a fuel source for a not-so-distant line of automobiles. Though hydrogen can be supplied within current internal combustion engine designs, the prospect to welcome a new paradigm in motoring existed as fuel cells proposed converting fuel into electrical energy.

Bullish in the promotion of fuel cell technology at the beginning of the 21st century was General Motors (at least, the old General Motors). Having made an initial pledge to have a production-worthy fuel cell car ready by 2010, there has clearly been some hiccups.

The enthusiasm for the fuel cell technology represented a promising sign for an American auto industry. With the Detroit three often on the receiving end of criticism for playing catch-up to Japanese and even European trends on high-technology, GM as well as Ford (who even built a select number of fuel cell-propelled Focus cars) were was seen leading the fuel cell development charge.

Since it was also a boom-era for sport utility vehicles, the fuel cell work doubled as positive publicity for American companies in the face of environmental concerns. Following raved reviews of concept cars such as the GM Hy-wire and the AUTOnomy, the fuel cell was not only showing a new source of propulsion but a reason to rethink automotive design.

As General Motors pushed for their aborted 2010 target, many scientific experts immediately debunked the automaker’s timetable realizing the new technology presents new obstacles which could not be overcome in a short time. Battling production and public relations troubles with hydrogen gas itself, the technology of fuel cells has demonstrated questionable practicality.

Previous fuel cell designs incorporated a sizable amount of precious metals in their construction including platinum (a metal which costs over $1,500 an ounce). With price of materials as well as the development of experimental units led some fuel call skeptics to doubt if the technology can ever be viable for road-going vehicles.

As finances became tighter at GM, their corporate effort turned towards hybrid gas/electric powerplants giving birth to the Chevrolet Volt instead of a fuel cell vehicle. 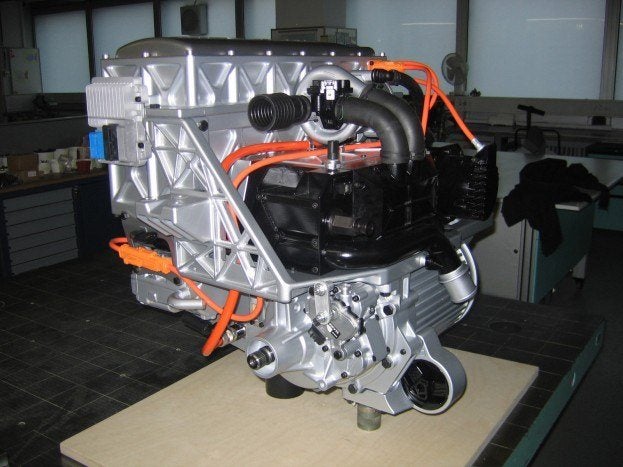 With all-electric and hybrid vehicles receiving much of the spotlight, fuel cell propulsion has faded from the headlines. Out of the spotlight, fuel cell technology has made some serious advances and General Motors has not abandoned hopes for hydrogen fuel cells. “In fact, we have not discovered anything yet to suggest mass volume cannot ultimately be attained.” GM’s vice president of R&D and Strategic Planning said in a 2008 conference.

Running a small fleet of more than 100 Chevrolet Equinox crossover vehicles as demonstrators through the past year, GM has an all-new fuel cell system said to be half the size and 220 pounds lighter than the previous unit. Roughly the same shape as a four-cylinder engine, this next-generation fuel cell uses only 50% of precious metals to produce power at a greatly reduced production cost. In a published report last month, Toyota suggests that a fuel cell car can actually be built for under $50,000 using today’s technology.