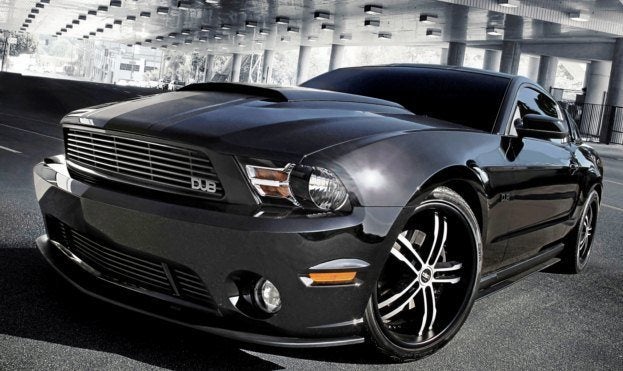 With countless “fly ridez” rollin’ round on phat 22’s, it was only a matter of time before carmakers started making official versions of these pimped-out wheels. Did I say all that right? Ford isn’t the first, but the 2011 Mustang DUB Edition is sure to make an impression among the youngsters and fly homies.

Maybe I’m being a bit harsh, this thing is actually pretty nice. Based on the newly testosterone-infused 305 hp 2011 Ford Mustang V6, the DUB Edition features some nice 20-inch TIS wheels wrapped in Pirelli tires, DUB logos on the front headrests and front grill, and a special DUB stripe package. Ford and DUB magazine also teamed up with Roush to add a front fascia and splitter, Roush lowering springs, and Roush quarter window louvers and windshield banner.

The 2011 Mustang DUB Edition will be offered in coupe, convertible, or glass-roof styles, with your choice of black, blue, red, or silver paint on a black interior. Choose from a six-speed manual or automatic transmission. The car will be available later this fall and price hasn’t yet been announced.