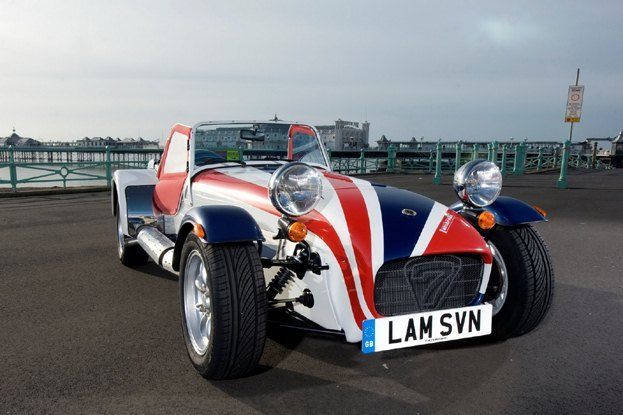 As many of our long-term readers know, I’ve got a bad, bad Jones for Lotus 7s. And not just the originals or the Caterhams (which is what we have here) but almost any of the faithful continuations of Saint Colin’s masterpiece from lo those many years ago; Birkins, Westfields, those crazy-assed Caterhams with motorcycle engines, those Westfields with Miata drivetrains … any of those really do it for me. At this point, if someone were to say to me: “You can either have a free new Ferrari or a free 7 built to your spec,” I’d probably go with the 7. But back to the subject at hand …

And doesn’t this seem like one of those ideas, in retrospect, that should have been done a long time ago. It seems that Caterham, the keepers of the official flame (i.e. these were the guys that Colin Chapman sold all the tooling and rights to back in the mid-70s), have teamed up with Lambretta to make a special edition 7.

Now, in the past, a special edition 7 from Caterham meant something like fitting the engine from a Honda Fireblade motorcycle under the bonnet (no, I’m serious, and so is that car), but in the instance of the Lambretta 7, it’s all pretty much a C & C special. There’s no changes under the skin to the Lambretta Special. It’s still using the stock 125HP 1.6-liter Ford Sigma engine hooked up to a five-speed manual gearbox. Of course that still means that it’ll go like blazes, since a Caterham tips the scales at around 1100 pounds – or half of what a new Miata weighs.

So what Caterham did, was join forces with British-owned fashion company, Lambretta Clothing, and yeah, I have no idea either if they’re connected with the scooter people. The Lambretta visual treatment consists of unique body paint, decals and livery that looks like something out of Keith Moon’s dreams, circa 1966.

And on the inside it’s more of the same. There’s a matching color scheme straddling the leather seats, dash, carpets and boot. There’s hand-stitched seat piping, embossed Lambretta motifs and a rather fetching Moto-Lita steering wheel to round off the interior upgrades. 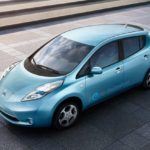 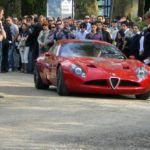