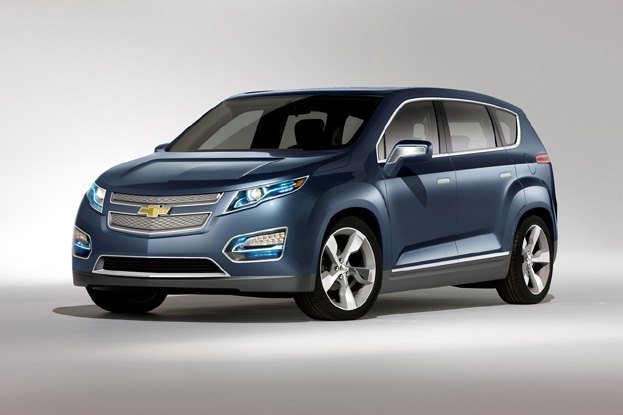 Here’s an Earth Day surprise that’s surprising in more ways than one. What we have here is the Chevrolet Volt MPV5 Crossover. Essentially it’s a minivan version of General Motors highly anticipated series hybrid Volt sedan. The other surprise (and maybe this is even bigger?) is that GM decided to roll out the Chevrolet Volt MPV5 Crossover at this years Beijing auto show.

Rolling it out at Beijing is interesting for two reasons. First, it shows (once again) just how importantly car makers view the Chinese market. And secondly, rolling out an eco friendly hybrid people carrier in China … well, let’s just put it this way: Have you SEEN what the Chinese consider acceptable environmental regs? The way they treat the environment makes Dick Cheney look like card carrying member of The Sierra Club.

Those two oddities aside, what have we got here?

First off, it’s worth noting that the Chevrolet Volt MPV5 rides on the same Voltec architecture as the Volt sedan. The Volt design chief Bob Boniface’s name on the patent drawings and this is a full blown five-passenger crossover. The Chevrolet Volt MPV5 concept (yeah, like they aren’t going to produce this) incorporates the design elements from the Volt, including the headlight, tail lamps and grille. And the overall design of the five-door hatch body style is very similar to the larger Orlando crossover. Size-wise, the Volt MPV5 is about four inches longer than the current HHR.

The Volt MPV5 is motivated by the same 150 horsepower engine and 16 kilowatt-hour battery used in the Volt sedan. However, due to its larger frontal area and increased drag means that the Volt MPV5 has a 32-mile electric range as opposed to the Volt’s 40 miles.

The Crossover has seating for five (and that’s five adults, they say) and 30.5 cubic feet of cargo space behind the seats. Roomy. The dashboard appears to be the same one used in the Volt, right down to the dual LCD displays.

Put it this way, we could very well be looking at the second Voltec product in the GM North American lineup.