American Blue Oval fans worship the immense V-8 power of the Ford Mustang and its super high-performance Shelby variants, considerably higher fuel prices and narrower roads in European deprives drivers east of the Atlantic Ocean a forceful pony car. Representing rather a boring commuter vehicle in the North America, the Ford Focus in Europe since 2005 has existed in a more privileged life as a higher class compact car. A more refined vehicle, the European Focus also stands on the performance car food chain in the form of the Ford Focus RS.

While RS is more commonly associated with the Chevrolet Camaro in the United States, Ford’s European arm has also long-exploited the Rally Sport acronym selling special edition sport compact cars geared for competition. Premiering at Germany’s 2010 Leipzig Motor Show, the 2010 Ford Focus RS500 is a special vehicle considered the swan song for the outgoing European Focus. For a swan, the Focus RS500 will scream like a eagle.

Producing power incomprehensible to the North American Ford Focus’ 143 horsepower 2-liter inline-4 engine, the UK branch of Ford has juiced up the small car offering Focus RS by belting a turbocharger and intercooler to a 2.5 liter five-cylinder powerplant. Through the RS500 upgrade, Ford engineers increased the engine’s breathing habits by enlarging the intercooler, air box, and exhaust pipe volume. A monstrous 350 PS (equivalent to over 345 horsepower) fed through a 6-speed transaxle. Despite peak engine power set high at 6,000 RPMs, the 2010 Ford Focus RS500 secures 0-60 mile per hour times within the 5 to 5.5 second range. 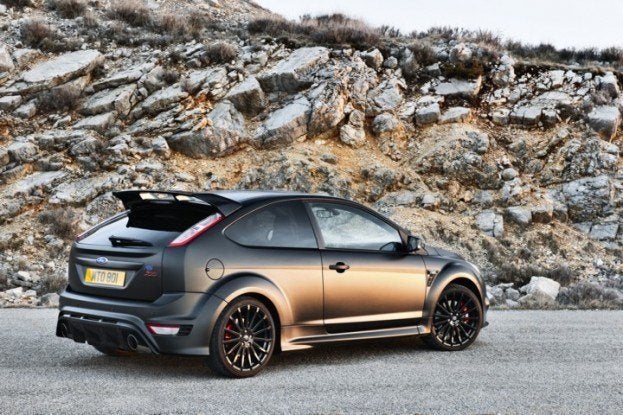 Inside, the Ford Focus RS500 plunges the adrenaline-seeking riders. With the driver enjoying benefits of a great power-to-weight ratio, passengers can be driven into jealousy. Augmented to compliment the extreme sport feel as well as the Panther Black exterior,  carbon-fiber insert center trim and optional Recaro bucket racing seats  are unique to the Focus RS500 trim. A special RS500 plate is worn on the center-console identifying an individual vehicle’s place in a rare crop of Ford factory

To commission only 500 examples to be distributed through 20 European regions, the Ford Focus RS500 will find their way into a select number of drivers within the United Kingdom, Germany and other neighbouring countries. More than could be said about sport compact lovers in the new world.

According to marketing people within the auto industry we, as North American auto enthusiast, simply lack the appetite for small cars. If the new Ford Focus appears in Europe in RS trim, perhaps Ford Motor Company might induce some global hunger. Maybe the all-new 2011 Ford Focus will eventually lend everyone a non-discriminating taste of small car performance.