And speaking of W12s … it seems that someone got the bright idea of taking the W12 that VW makes (and uses in cars such as the aforementioned Audi A8L W12), and putting it into a Volkswagen Touareg. Now what could possibly go wrong with that?

Before I did into this, let me just say that I’ve always found the W12 engine configuration interesting. It seems like a clever answer to questions of packaging, until you start trying to figure out the intake and exhaust plumbing, and then it could almost turn into a pipe bending and thermodynamic nightmare. That said, it does seem like the VW group’s W12 is one hell of a mill.

All that said, what we have here is German tuning firm CoverEFX (hey, look at that, a German tuning firm who’s name is not in all caps!) who has decided to offer some serious mods to Volkswagen’s Touareg. No, curiously enough, not the latest and just unveiled Touareg, but the model before the latest (odd).

It’s called the W12 Sport Edition, and CoverEFX’s tuning package will be limited to only 500 units and will be priced at €140,500, and that includes the Touareg (which is also kind of odd, since most of the time, you have to provide your own car). Also, 140K+ Euros ain’t chump change … that’s about what a house costs – which is a lot for a Volkswagen SUV. 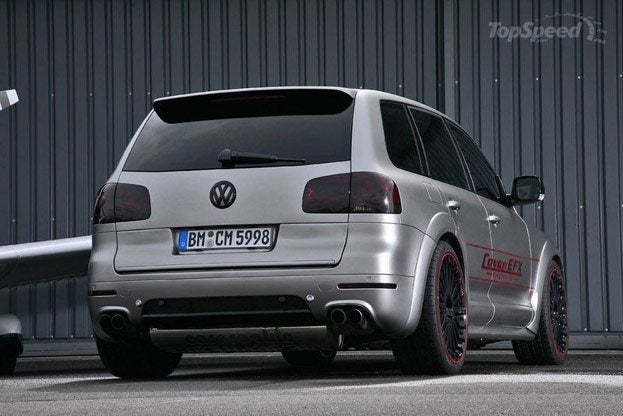 But the said Volkswagen SUV has had a thorough going over. Naturally, gets the now typical body color treatment: It gets wrapped instead of painted (lazy-assed dorks) and its flat/primer toned. In the case of the W12 Touareg it’s covered in CFC film in “gun-metal mat/black gloss”. All the rest of the bolt on bits, the air inlets, front grille, and mirrors, as well as what used to be the chrome molding, are also done up in black. The Touareg sits on 22″ RS-L light alloy rims from Kahn (Kaaaaaaaaaaaaahhhhhnnnnn!!!!) with black powder coating and red pinstripes.

CoverEFX also had a go at optimizing the system software, which includes does away with the speed limiter. The W12 engine has been tuned to deliver an impressive 500 hp. They also added a sports air filter, and a high-grade steel Cargraphic exhaust silencer, and the body can be electronically lowered to maintain stability for the power upgrade.