The 2010 Jaguar XF, along with its XK and XJ siblings, are doing a solid job of giving Jaguar the about-face it needs to throw the uptight British aristocrat image out the proverbial window. Replacing the aging and not-so-great S-Type, the XF infuses a bit of enthusiasm into the brand and goes up against hard-hitters like the Mercedes E-Class, Audi A6, and BMW 5-Series.

After only one year of being introduced, the XF’s made quite an impression, and has a few significant changes over last year’s model. At introduction, the primo-luxo-sport sedan featured only one engine – a 4.2-liter V8 that produced 300 hp or a supercharged version pushing 420. While the base XF’s engine stays the same for 2010, we get a much more exuberant 5.0-liter powerplant in the XF Premium giving us 385 hp, a supercharged version of that engine producing 470 hp, and if you check the “give me whiplash” box on the order form, Jaguar will give you the XFR, tuning that blown V8 to send 510 hp to the rear wheels. All four trim levels get a six-speed automatic with paddle shifters; no manual transmission available, even on the XFR. 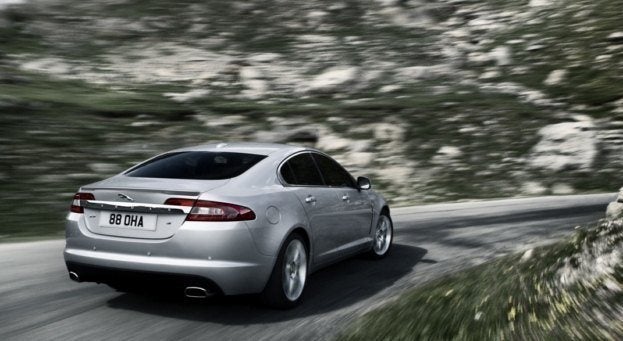 Seems like everyone has the same first impression of the 2010 XF: “It’s pretty…kinda looks like an Aston Martin.” Yeah, it does, especially the rear. Not that it’s a bad thing; Astons are some of the most gorgeous cars on the road – emulate them and you’re bound to have a knockout. The XF is taller, longer, and thinner than a DB9, though not as long as the four-door Rapide.

The XF’s interior is the automotive equivalent of an Apple product – it’s sleek and sexy everywhere. Even the knob used to shift is flush with the center console until you turn the car on; the knob then rises up for you to rotate into gear. The air vents are similar – flush with the dash while the climate control is off, rotating open when you need some heat or A/C. Gimmicky? Yeah, a bit, and if one of those motors goes kaput – $253 for just the part, $110-ish per hour labor not included. Just so your air vent will rotate up and down. Yeah, ouch. Just hope it gets stuck in the open position. But hey, who keeps these things after the warranty anyway, right? The Interior layout is stylishly modern – something Jag was never known for in the past. Something called “Phosphor Blue Halo Illumination” glows blue at night under the door handles and around the center console controls; it adds to the Jag’s modern style and looks great. Even the wood grain – which I normally despise – looks proper next to the aluminum dash and center console instruments. “JaguarSense” uses a special proximity sensor to make opening the glovebox and turning on the overhead lights as simple as lightly brushing your finger across it. Fun to play with and impress passengers, at least. Push the pulsing red Start button and the engine roars to life then settle into a subtle purr.

Acceleration can best be described as “effortless.” It almost feels like an electric car at regular speed – a smooth and linear swelling of speed that it accomplishes with no sign of a fuss. Next thing you know, you’re going 85 in a 45 mph zone. Seriously, this car is manipulative like that. Throw her into sport mode by pressing down on the shift knob and rotating one click to the right and your RPMs will be held until near redline – even when cruising – and the slightest movement of the right foot will result in instant forward thrust. Pull back on the wheel-mounted paddles for a sort of temporary manual mode. After a few seconds, however, it reverts back into fully automatic mode, which I found irritating.

JaguarDrive Control consists of a few buttons on the center console which you can change depending on driving style. Winter mode is standard across the line, adjusting engine response and transmission to better handle slippery conditions. Dynamic Mode is standard on all except the base model. Press the little flag-looking button and Dynamic mode activates, quickening throttle response and shifts, and letting out a bit on stability control.

Controlling the audio, climate, and anything on the LCD monitor proved, at the very least, annoying. Controls are clumsy and unintuitive, requiring unnecessary button presses, commanding the driver’s attention far longer than it should be taken from the road. Climate control, for example, has two areas where it’s controlled: four buttons and a knob on the right side of the center console, and on the LCD itself. The problem is, only basic functions (power, fan, temp) can be controlled through the physical controls, everything else on the LCD (but not power.) To customize the climate then, you must press the physical power button, press “Menu” on the LCD, then “Back,” then “Climate” (all of which are on different corners of the screen, by the way,) then adjust as necessary on too-small virtual buttons. And the navigation – don’t even get me started. Too bad it’s standard.

The 2010 Jaguar XF took a couple days, but it grew on me. It’s hard to find something as poised and sophisticated as the XF while still having the ability to scream around corners at high speed without feeling like you’ll flip over any minute. It’s incredibly effortless to drive, be it down the street, a dirt road, or long road trip. The seats are comfortable, the suspension is sporty without being harsh, and it’s unusually quiet inside.

Check out the Mercedes-Benz E-Class, Audi A6, and BMW 5-Series, which are the three most direct competitors in its class, depending on trim chosen.