I have always liked unique cars – something that not everyone else has, has the ability to have or even knows about. Small manufacturers, independent companies sprouting up – its a big part of the reason I like to see new companies like Fisker and Tesla succeed – and why many fans (including myself) cheered when Saab got purchased by Spyker after being pronounced dead several times by the media.

Like most industries, the automotive industry has consolidated into large players – there used to be more small players on the scene globally.

Glas is a company with a particular car that I would like to spotlight. Despite not being well known, it has a history intertwined with one of the biggest current players on the automotive scene – BMW.

Hans Glas GmbH was a German company with a relatively short history – 16 years. In those short years though. they had some impressive developments. Glas was one of the first companies in the world to use a timing belt with an overhead camshaft in a mass-produced automobile engine.

The biggest upmarket effort was no doubt the 2600 GT, introduced as a concept in September 1965 at the Frankfurt Auto Show with a V-8 engine. It later became the 3000 GT. In Germany, Glas moving upmarket in such a fashion is a bit similar to the way Hyundai has been moving upmarket with cars like the Genesis and Equus, but it was to an even higher degree.

The forerunners to the 2600 GT were the 1300 and 1700 GTs – which sold fairly well, but Glas began to find itself under stiff competition. The answer? Not return to Glas’ original roots, but to go further upmarket.

The 2600 GT was a four-seat coupe designed by Italian design house Pietro Frua. It looked similar to the Maseratis of that era. Its small-displacement 2.6-liter V-8 made 140 horsepower and the Frua styling earned it the name of “Glaserati” in Germany. Production for the 2600 GT started in August 1966.

Glas had planned to increase the engine capacity to 3.0-liters, but that wasn’t undertaken until after the sale to BMW was completed. The .3 bump in engine capacity for the BMW model resulted in 20 extra horsepower from the engine, bringing the total to an impressive 160 horsepower. The Glas’ GT’s pricetage and image made it extremely rare. The 2600 GT sold only 317 copies while Glas was an independent company. The 3000 GT with BMW roundel logo produced between September 1967 and May 1968 sold 389 models. This resulted in only 706 cumulative copies for the model.

I’m a fan of Maseratis so I naturally am inclined to like the styling – but I also admire the audacity of a company like Glas to produce such a vehicle. But, it wasn’t a successful experiment – Glas was not to be much longer. The purchase enabled BMW to have a stop gap high-end GT for the time being until a new model was developed, but while BMW rebadged the 1700 GT as well, it replaced the Glas 3000 GT as soon as possible with its own next-generation 2600 CS Coupe, thus ending the Glas area. However, remnants of the company still live on.

When BMW purchased Glas in 1966, BMW’s sole Munich, Germany plant was running at capacity. The purchase was led by the company needing to look for more capacity to continue its growth. Glas, with factories in Landshut and Dingolfing, was a ripe purchase opportunity. Today, the former Glas plant in Dingolfing is BMW’s largest and is run by the son of Hans Glas, the founder of the company. With only 706 units produced and much less than that surviving, a 2600 GT or 3000 GT find is a rare one indeed. Finally, a Glas becomes sought after. 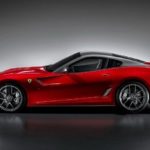