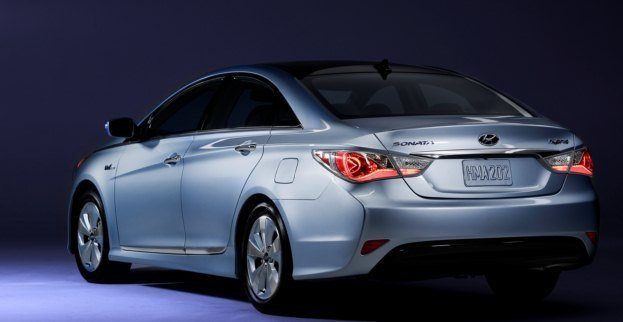 Today in New York (at the Auto Show) Hyundai rolled out the all-new 2011 Hyundai Sonata. It is the first vehicle in the automotive industry to offer three new fuel-efficient powertrain technologies: Gasoline direct-injection (GDI), twin-scroll turbochargers, and full-hybrid powertrains.

“The Hyundai Sonata Hybrid is the new kid on the block, but it’s not a follower. Its full parallel hybrid configuration and breakthrough lithium polymer batteries offer a new take on traditional hybrid design, while its unique design sets it apart from the mid-size hybrid pack,” says John Krafcik, president and CEO, Hyundai Motor America.

The in house-developed Hybrid Blue Drive architecture is a full on parallel hybrid drive system. It can operate on an electric motor, gasoline internal combustion engine, and a combination of the two depending on driving conditions and driver demands. Hybrid Blue Drive differs from the “power split” technology used by most competitors, to allow significant efficiency returns at higher speeds. Hyundai Hybrid Blue Drive is the first, and so far, the only system using lithium polymer battery technology.

Hyundai says that using lithium polymer offers benefits such as robustness, power-density and package flexibility, which make it ideal for automotive applications. The Hybrid Blue Drive also is unique in its use of the company’s own highly efficient, compact new 6-speed transmission, modified with hybrid starter-generator, electric motor, and low-friction oil pump, which together allow the elimination of the traditional torque converter.

“Hyundai applies advanced technologies to vehicles to provide the best solutions for the everyday driver. Unlike traditional hybrids that trade off highway fuel economy for higher city ratings, the Sonata Hybrid delivers best-in-class highway fuel economy, while still delivering about a 40 percent improvement in city fuel economy compared to a Sonata equipped with the Theta II GDI engine. We think this is a better balanced approach for the majority of car buyers,” said Krafcik.

The Sonata Hybrid delivers electric-vehicle operation at steady-state speeds of up to 62 miles per hour. After that, the gas engine kicks in, depending on the state of charge, acceleration and vehicle speed. The two propulsion units develop a total output of 209 horsepower at 6,000 rpm, and 195 lb-ft of torque. The new Sonata tips the scales at 3,457 pounds, which is pretty heavy for a car that size, but is still 263 pounds lighter than the Fusion Hybrid, by way of comparison.