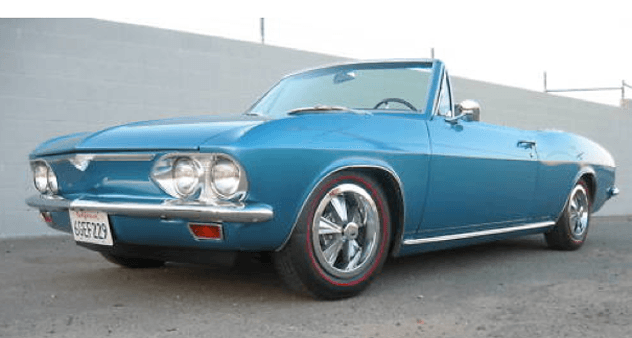 Here’s an interesting conversion that should send Ralph Nader into a full loop lock up of the main processor: A rather nice EV conversion of a very nice looking Corvair Corsa convertible. But before we get into that, I’ve got a great story about electric Corvairs.

I now, how many of them are there?

Lord, I don’t know, but I do know that back in the late 1960s MIT built an electric Corvair of their very own. My oldest brother is a frighteningly smart guy, and a car guy to boot. He was attending MIT, and working on his masters (see, I’m not kidding) and right down the hall from his lab was the lab for these other grad students that were converting a Corvair to run on a few scores of Sears Diehard car batteries.

It was part of an EV competition happening back in the day. They had already run the thing out at the Bonneville Salt Flats (cool!) but they brought it back to Cambridge for some tweaks to make it faster.

So one day my brother is working in his lab, making a thing that you put a normal book in and it will turn it into Braille in real time so blind people can read (cool, huh?), and he says, ‘All of a sudden I hear this commotion from one end of the building. And then I smell smoke like an electrical fire. So I open up the door and look down the hall. And coming from the end where the garage is, there’s acrid smoke just billowing out, but I can see it’s calming down.”

So he goes down to investigate, and there’s the MIT electric Corvair covered in soot.

Turns out that one of the guys had dropped a Craftsman combination wrench on the main positive and negative terminals, and grounded out the array of batteries in a split second. The wrench literally welded to the terminals.

Anyway, this EV Corvair looks to me a LOT better than the MIT version.

Under the bonnet of the eBay car there’s a 144V AC 24 conversion kit made by Electroauto. That kit alone costs rings in at around $10,000, without batteries. Which this car has 18 eight-volt lead acid batteries “mounted as low as possible for good balance.” nice touch.

The seller is offering to take $1,500 off if you don’t want the Hurst wheels with redline tires and opt for stock rally wheels. But I say go for the Hursts. Nice look.