Since it was released in 2007, the Mazdaspeed 3 has dominated the small, high-performance hatchback segment in terms of being an inexpensive, fun-to-drive powerhouse. For 2010, the ‘speed3 received the same overhaul of the standard Mazda3, getting a completely revised body style, a new (and very improved) interior, and upgraded suspension. Unlike the standard model, however, the speed3 keeps the same 263 hp, 280 lb-ft turbocharged 2.3-liter engine. Not that it’s a bad thing – this engine is a perfect match for the car.

This market is getting particularly hot, and to stay on top, Mazda has to compete with the Subaru WRX, Volkswagen GTI, Mini Cooper S, Honda Civic Si, Chevy Cobalt SS, and Mitsubishi Lancer Ralliart, among others. That’s a lot of good competition; can Mazda stay ahead of the pack?

The first thing you’ll notice about the new Mazdaspeed3 is the revised styling. It’s certainly unique, and while most people cringe at the wacky “smiling” face up front, it’s an acquired taste that does eventually grow on you. Although our review model’s color is Black Mica (we’re using stock photos in this review,) I think all versions of the Mazda3 look best in Celestial Blue Mica. The new body also helps with aerodynamics, which serve to decrease wind resistance and increase fuel economy over last year’s model, which was becoming outdated and bland. Finally, the Mazdaspeed3 includes a rather pronounced hood scoop to feed air to the car’s intercooler.

Inside, you only get one seating material – a black leather and black/red sport cloth combo that ends up looking pretty good, as long as it’s on a black or red exterior. I imagine the blue exterior with this colored cloth might look out of place. The plastic on the passenger-side dash tries to carry over the black/red sport cloth theme, but ends up looking cheesy instead. At night, you get a nice red and blue color scheme with blue lights in the footwells and door handles. The buttons and knobs on the center console are busy, making it somewhat confusing to control everything. The steering wheel has more buttons than your standard TV remote, but once you acclimate, it’s nice to have that amount of control at your fingertips.

Seating is comfortable and soft, plenty of room for passengers, and the driver gets enough bolstering for aggressive driving. The close-ratio 6-speed manual transmission (the only tranny available for the Mazdaspeed3, thankfully,) is silky smooth with great shifter travel. My biggest complaint about this car, however, is also in the transmission. The clutch has inconsistent travel; it’s very light until one area – around the catch point – that gives more resistance, almost like it’s getting stuck. This makes for jerky shifts, especially for the first few days driving. After a while though, things get smoother and you can pull off some nice quick shifting. The upgraded suspension alone is worthy of a 2009 to 2010 upgrade, especially if you take it to the track.

The 2010 Mazdaspeed3’s steering is solid and fun to drive. It’s not too light or overly boosted, but it’s still easy to drive fast. One complaint about the Mazdaspeed3 I hear over and over – the torque steer. Indeed, it’s some of the worst torque steer I’ve dealt with, and it’s unavoidable in this car, being so powerful and driven by the front wheels. The interesting thing is, I like it. Giving any decent amount of thrust in this car requires that you fight with the steering wheel to keep it in a straight line. Most complain, but I like to fight with it a bit – it reminds me that I’m in control. It may not give you the fastest lap times, but it sure will be a fun drive. In fact that’s one of the most interesting things about this car. It’s a bit wacky, like someone took a regular Mazda3, upgraded it to where it had more power than it’s supposed to handle, and put it up for sale.

One interesting and slightly disappointing feature is at around 6000 RPM when the boost pressure is cut. Mazda tells me the PCM (Powertrain Control Module) can “close the throttle and open the wastegate to maintain compressor speed at a safe level.” Basically it’s a feature to protect the turbo. Understandable, but it still cuts into the fun just a bit. 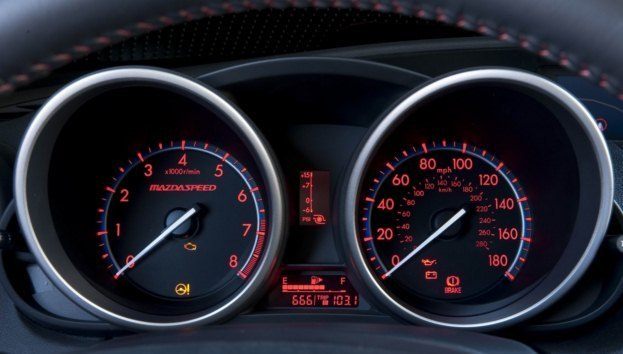 Given its starting price of $23,195, you get a helluva lot of car for the money. Your single option is the $1,895 Tech Package, which includes Advanced Keyless Entry with push-button start, an upgraded 10-speaker Bose sound system, navigation, and an alarm system. Given that many optional nav systems cost north of $1,800 alone, that’s a pretty nice deal.

The engine is a 2.3-liter turbo four producing 263 hp and 280 lb-ft. It requires premium fuel, and manages 18 mpg in city traffic, 25 on the highway – not bad for something this quick and fun.