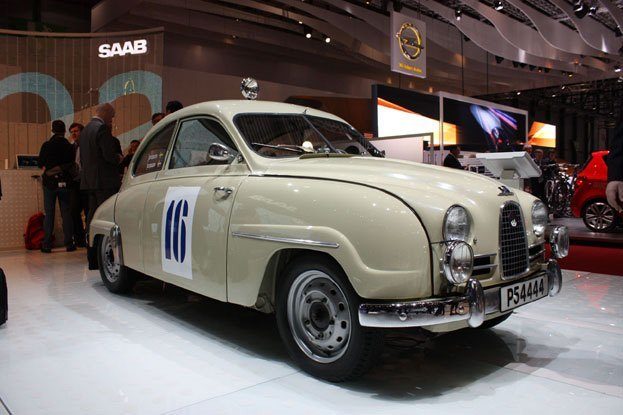 This is just too cool of a move: The CEOs of the now united Saab and Spyker brands will be driving a 1957 Saab 93 in this years upcoming Mille Miglia historic race. Too bad Bob Lutz wasn’t at Chrysler, think of him paired with some random Agnelli scion in an Abarth 500 for the full 1000 miles.

Sure, there’s lots of solid marketing reasons behind this. It will certainly draw attention to the new merging/acquisition of Saab and Spyker. And that is good. It would have been a shame if, due to current economic conditions and GM’s bungling, Saab were to go the way of Studebaker. Despite their faults, Saab are OK cars, and they are better to have around then not. And Spyker, given their own quirks and such seemed like a great match to pick up Saab and continue the brand.

Not only does this save Saab, but it also, potentially, gives Spyker a good, solid economic base to draw from (e.g. sales of Saabs) so they can continue to build Dutch supercars.

Anyway, Spyker CEO Victor Muller and Saab CEO Jan Åke Jonsson will be driving in this year’s Mille Miglia road race, and they’ll be doing it in a 1957 Saab 93. And this specific 93 is a replica of the car that won the Finnish 1,000 Lakes Rally in 1957. Nice touch.

The vintage 93 replica features a 750cc three-cylinder two-stroke engine that has been tuned to Group 2 specifications and now cranks out 55 horsepower. I know, that doesn’t sound like much, but it’s 22 horsepower more than the standard car. And back in the late ’50s, a car this small and light producing that kind of power could be quite competitive. Just ask the competitors that got beat in that year’s 1,000 Lakes Rally. The reproduction racer should be good for hitting 62 miles-per-hour in 13 seconds and a top out at 93 mph.