Over the past few years, there’s been a surge of small, affordable hatchbacks coming on the market, and they continue to flow. We have the Toyota Yaris, Nissan Versa, Honda Fit, Mazda3, VW Golf, and plenty of others to choose from in this range. It’s no surprise – they’re cheap, fuel efficient, have room to store all sorts of crap with the rear seats folded down, and some are even fun to drive. So it’s no surprise that Suzuki (remember them?) wants back in the game.

For 2010, Suzuki added a new model – the SX4 SportBack. This variation on the SX4 wagon makes a few changes for the better. The SportBack gets rid of the roof rack found on the SX4 Crossover and adds a body kit and rear spoiler. To go along with the sportier look, Suzuki lowered the SportBack by 15mm and tightened up the suspension. A new powertrain across the SX4 line is welcome – now we have a 2.0-liter four-banger with a tick more power and 30 mpg on the highway. New transmissions include a standard 6-speed manual or optional CVT to replace last year’s 4-speed automatic. Our test model was fitted with the 6-speed. It wasn’t bad, but I found six speeds to be a bit much for the relatively weak engine. 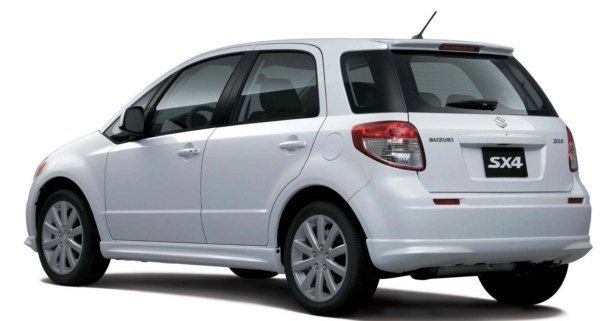 Suzuki has always been good at providing a good value, and the 2010 SX4 SportBack isn’t changing that. Coming in at $17,949, this “hot hatch” comes standard with power accessories, leather steering wheel, fog lights, six-disc CD changer with upgraded audio, cruise, automatic A/C, 17-inch alloy wheels, keyless start, and most surprisingly – standard navigation. The navigation needs some explaining – it’s not an integrated system like you’ve seen in countless other new cars – it’s a portable Garmin unit stuck into a pop-up slot on the SX4’s dash (see picture below.) Weird, yes, but it works. One feature missing – standard auxiliary audio input – a big downside, though there is an iPod interface available.

So, how is driving the SX4 SportBack? Frankly, it’s a weird little thing. The seating position and overall comfort certainly leave something to be desired, the lack of a real center console feels econocar cheap, and the interior materials aren’t of the highest quality. But after all, you are driving a sub-$20K sport hatchback. The 6-speed manual transmission has one too many gears for the car’s power output, and shifting just doesn’t quite feel quite – it’s a bit too imprecise. 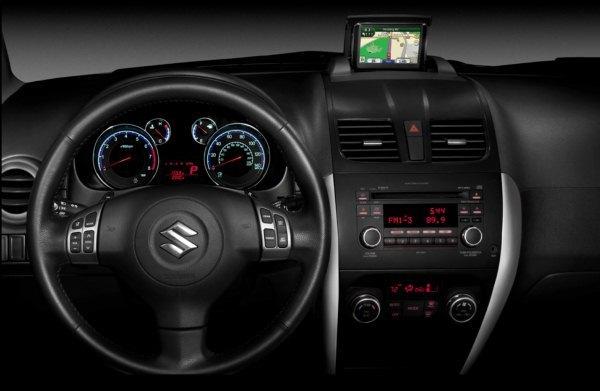 There is, however, more interior room than you’d expect, and overall it’s a pleasant ride. The amount of standard equipment in the SX4 SportBack is great compared to competing models, and the price is definitely right.

The problem with the SX4 is that it’s just not unique enough to stand out from the contenders. Other than the value factor (which might just be enough for some buyers,) there’s nothing about the car that screams “buy me instead!” Other cars, like the Toyota Yaris and especially the Mazda3 and VW Golf are more fun, more engaging, and have more personality than the SX4 – but they’re also more expensive and/or get worse fuel economy. The 2010 Suzuki SX4 SportBack adds a bit of spice to an otherwise uninteresting car. But it makes sense – and that’s more than enough for many buyers, especially nowadays.