Any time Koenigsegg unveils a new car, it’s a truly special occasion. The Swedish supercar company just unveiled their latest creation at the 2010 Geneva Motor Show – they call it Agera.

Agera is a Swedish term that translates into English as “to act.” And act it does. The Agera is fitted with an incredibly powerful twin-turbo 4.7-liter V8 engine producing 910 horsepower (!) and 811 lb-ft of torque – all while running on regular-grade gasoline. The Agera rockets from 0 to 62 mph in 3.1 seconds, going on to 124 mph in only 5.8 more seconds, eventually hitting its top speed of 245 mph-ish. Holy crap this thing is fast!

Koenigsegg says they like to stick with tradition, which is why the Agera looks suspiciously like the CC lineup, first developed 15 years ago. A few tweaks and modern interpretations later, the car still looks futuristic. 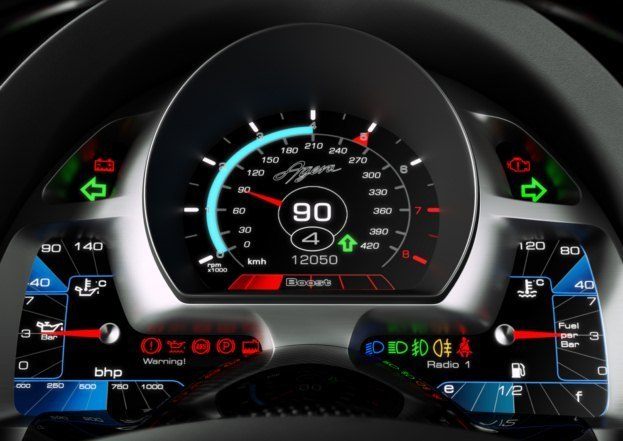 Of course a lot of new technology went into the Agera, many of which is the first in the industry. They’ve went so far as to develop a new type of interior lighting they call “Ghost Light.” Through the use of invisible nanotubes, the lighting shines through what appears to be solid aluminum buttons. This is the stuff of concept cars, and only Koenigsegg would put it into production. The rest of the center console is carbon fiber, as is most of the car itself. A customizable display will show a range of metrics from G-forces, power, sat-nav, music, as well as a lap timer for those brave enough to take it to the track. Koenigsegg also claims their traction control system is the fastest adapting system available, auto-adjusting for different road conditions, driving styles, and of course it’s customizable.

Naturally, the Agera is a two-door, two-seater, and yes, it features their specialty dihedral synchro-helix doors. The car will be put into production in about six months and will be built right next to the incredible CCX and CCXR. Check out more pictures below: