Lamborghini has been in the news a lot lately. Rumors have been swirling about a limited-production run of the Sesto Elemento Concept and official details about the engine powering the Murcielago replacement have been released.

Given that the Murcielago ended production earlier this month, attention has suitably been fixated on its replacement.

Until that comes, Lamborghini is working to shift our attention by introducing a new iteration of the Gallardo Spyder. The Gallardo is, after all, Lamborghini’s only product available on the market until the new supercar arrives.

Say hello to the Lamborghini Gallardo LP 570-4 Spyder Performante. Quite a name there! The Performante is the Spyder counterpart to the coupe’s LP 570-4 Superleggera (Italian for “super light”) model.

Like the LP 570-4 Superleggera, the Performante offers additional performance with a focus on lightness. As expected, carbon fiber is used extensively. What else do you expect from a company that named a car Sesto Elemento, which in Italian means sixth element? 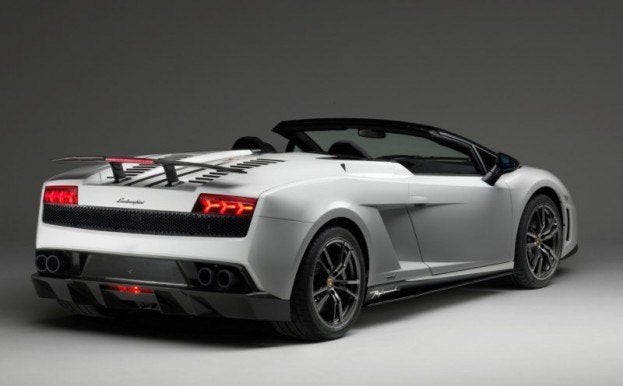 The engine cover, select underbody panels and rear diffuser is made out of carbon fiber composites, along with an optional rear spoiler.

In the interior, carbon fiber covers the center console and is used for the seat shells. Other lightweight materials are used as well, with Alcantera replacing leather and polycarbonate windows replacing glass ones. Even the new 19-inch wheels shave off twenty-nine pounds. Total curb weight checks in at 3,275 pounds, an 143 pound reduction over the standard Spyder.

As if the standard Gallardo wasn’t sporty enough, the Spyder Performante gets stiffer suspension tuning, along with more aggressive tires. Lamborghini didn’t stop there though, also boosting the Performante’s power output by 10 horsepower, to 562 horsepower.

The result? A 0-to-62-mph time of 3.9 seconds and a top speed of 201-mph. The Spyder Performante’s 562 horsepower 5.2-liter V-10 is mated to your choice of a standard dual-clutch transmission or a traditional six-speed manual. Now that’s what we like to hear – why not give customers the option between the two? This is an enthusiasts car, after all.

Exterior changes enhance the Gallardo’s appeal, with a meaner front fascia, the addition of some unique stripes on the hood and – you guessed it – carbon fiber pieces. Colors available include yellow, orange, gray, black, and white.