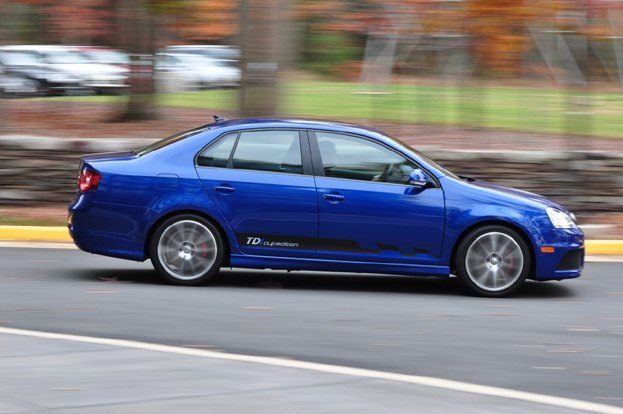 Well it’s about time. Volkswagen has finally gotten their 2010 Jetta TDI Cup Street Edition into the hands of their dealers, and hopefully, into the hands of consumers soon. Sure, the current Jetta TDI as it exists in stock form is highly desirable, and the TDI Sportwagen seem to flying off the shelves. The Jetta TDI Cup Street Edition (yes, that’s it’s full and too-long moniker), on the other hand is desirable for more than just its oil-burning engine and Teutonic efficiency.

The 2010 Jetta TDI Cup Street Edition looks like the diesel racers that VW has been competing with its the company’s TDI Cup for the past few seasons as seen on SpeedTV. Visually, there’s a lot of cool things on the car. It uses the same full body kit found on the racecars, including an aerodynamically tweaked front bumper, side skirts, and a rear valance.

This is more than just a tacked on factory aero kit however. You also get GLI-spec brakes and recalibrated suspension settings to improve handling. VW also saw fit to paint the brake calipers red, which is a nice bit of flash. There’s also 18-inch Charleston wheels wrapped in higher performance rubber, and on the inside there’s some rather attractive brushed aluminum door sills.

Sadly, power is still the same with 140 horsepower and 236 pound-feet of grunt being produced by the 2.0-liter turbo-diesel engine.

No, more than all the tacked on gee-gaws and special edition badging, what makes the Jetta TDI Cup Street Edition really special is that it might just make people think that being efficient can also be fun. And let’s face it, you can sell more cars if people think they are fun, rather than people thinking they should buy them because it’s good for the environment.