The New BMW ALPINA B7 Sedan – Get out Your Checkbook

So Alpina is still out there. I should actually say ALPINA (all caps), because that’s the way they spell it. I used to see ALPINA stroked 3 Series now and again, and then they more or less disappeared. I thought that ALPINA was gone, but no, they’re still out there. They’ve had a go at BMW’s top of the line 7 Series sedans, with impressive results.

Even more impressive is the amount of coin you’re expected to shekel out for these things. A few weeks ago they teased with specs and a few shots, but now they’ve let out the full kit, including prices. Yes, it’s all very impressive, but the price is more than a little staggering. As you would expect, you get a lot of power. Either B7 sedan comes with BMW\’s twin-turbocharged 4.4 liter, all-aluminum, High Precision Direct Injection V-8 engine. Naturally ALPINA has given it a working over, so now it produces 500 horsepower and 516 lb-ft of torque. Yeah, that’s pretty damn impressive. That’s enough power and grunt to move the ALPINE tweaked lead sled from 0-60 mph in 4.5 sec. BMW also notes that the massive torque is available from 3,000 to 4,750 rpm, which means the B7 “accelerates effortlessly from virtually any speed.” I wouldn’t argue with them. The B7 sedan also gets some ALPINA aerodynamic work as well. Front and rear spoilers which ALPINA says enhance the appearance, and they also improve stability and performance at high speeds. The front end aero has been reworked so that the fresh-air requirements of the transmission and engine oil coolers are separated out of the main cooler module for improved efficiency. The spoilers cut lift at the front by 30% and rear by 15%, and the exhaust system’s two double tailpipes are “seamlessly integrated into the rear bumper.” And you also get these really nice looking 20-spoke ALPINA Classic wheels.

Interior-wise the B7 sedan has ALPINA blue illuminated door sill trims, a Switchtronic heated steering wheel in hand-stitched Lavalina leather (no, I don’t know what Lavalina leather is either, and with Ricardo Montalban no longer with us, I don’t know who to ask). There’s the requisite Alcantara headliner, a Heads Up display, and a Black-Panel LCD screen instrument cluster branded with ALPINA. Hand-stitched Lavalina leather also covers the dashboard, the door panels, the center console, the multi-contour front seats with heating and cooling, and the heated rear seats. Both models of the BMW ALPINA B7 will make their North American debut at the Chicago International Auto Show and will go on sale at authorized BMW Centers in the Spring of 2010. 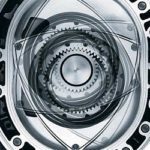