GM Goes Its Own Way On Electric Motors 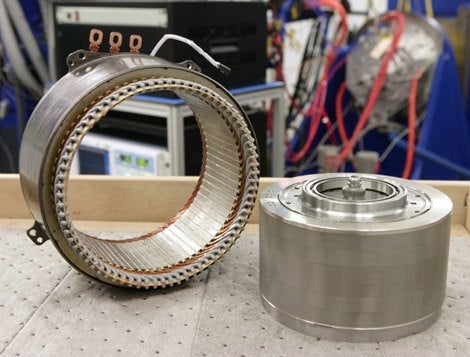 General Motors has announced that it will design and build its own electric motors within two years. This can easily be seen as GM taking the need for electric cars seriously. The General plans to devote $246 million to a factory that will produce the electric motors by 2013.

Making its own electric motors will allow GM to keeps abreast of progress in electric motor technology and deliver the highest quality power plants at the lowest cost. GM says it must make batteries, motors and the related electronic systems \”core technologies,\” especially with the Chevrolet Volt coming this year and the next-gen two-mode hybrid vehicles slated for a 2013 introduction,

\”In the future, electric motors might become as important to GM as engines are now. Our goal is simply to establish GM as a leader in automotive electric motors. We see that leadership as a key enabler – both to our long-term success and to our nation\’s move away from oil,\” said Tom Stephens, vice chairman of global product operations. \”

GM is placing a $246 million bet on electric and hybrid technology, and in doing so it is staking its claim in an emerging segment that could, by some estimates, encompass 20 percent of the whole vehicle market within 20 years.

Think about that for a minute. And also fold into those considerations that most major automakers are developing hybrids, plug-in hybrids and electric vehicles. And further realize that a lot of those manufacturers are using similar, if not outright identical drivetrain components sourced from a fairly small number of suppliers. For example, the Ford hybrid drive system in their Escape and Fusion is sourced from Toyota. GM hopes to set itself apart from the current state of competition by designing and building its own batteries, motors and related components.

\”Powertrain systems are where automakers have always differentiated themselves. Honda makes great engines, General Motors makes great transmissions, Subaru does great turbocharging. Those kinds of specialties are irrelevant in an electric car. But motor efficiency, battery efficiency, thermal control, all of these things are specific to electric vehicles and hybrids. That has to be brought in-house if there\’s to be any real differentiation between, say, a GM and a Ford and a Honda,\” said Aaron Bragman, an industry analyst with IHS Global Insight.

So, just how smart of a move will this turn out to be?