Dynamic Performance from the Start, Driving Pleasure in Perfection. That’s how the BMW press release for their new 5 Series sedan starts. BMW also uses phrases like ” The new BMW 5 Series Sedan is set the conquer the market.” Sweet Jesus. The last time some guys from Bavaria started talking like this …

Look, BMW can do amazing things with sedans, and with the 5 Series in particular. And no doubt this latest iteration will be one heel of a car (for a sedan), but I think it’s a mistake for BMW (or any other company for that matter) to blow their own horn like this. It just builds up our expectations, y’know?

“The new BMW 5 Series Sedan, the epitome of aesthetic design and supreme driving pleasure in the upper midrange segment, is conquering the road. Through its sporting and elegant looks, driving dynamics typical of the brand, outstanding efficiency as well as innovative comfort and safety features, the sixth generation of BMW’s executive express convincingly reflects the supreme standard of the world’s most successful manufacturer of premium cars throughout the entire process of development.”

I feel like offering the marketing ad writers a towel.

That said, just what does the upcoming 5 Series have to offer? The short answer is “a lot”, and there are few sedans that would be better than this one is my guess.

Styling-wise, BMW seems to slowly getting away from the abominations of the Bangle era. The upcoming 5 has the longest wheelbase in the segment and a long and sleek engine compartment lid, short overhangs front and rear and a coupe-like, graceful roofline. Yeah, in short, it seems a much more integrated whole and far less clumsy than previous versions.

But BMWs are all about the driving experience, and (on paper at least) the new 5 looks like it won’t disappoint. The new BMW 5 Series Sedan has an optional Adaptive Drive that includes Dynamic Damper Control, Dynamic Drive stability control, and BMW’s Integral Active Steering. Or to put it in layman’s terms, it has a whole bunch of gizmos that make up for your ham-fisted driving errors. Under that hood design that BMW is so proud of will be a slew of engines: One eight-cylinder, three six-cylinder petrol engines, two six-cylinder diesels, and a four-cylinder turbodiesel with an aluminum crankcase and common-rail direct injection. They don’t specify which ones will make it to our shores, but it’s a pretty safe bet that none of the oil-burners will.

Pity that, because the four-cylinder turbodiesel puts out 184 hp comes standard with Auto Start Stop and gets an average fuel consumption in the EU5 test cycle is just 5.0 liters/100 kilometers (equal to 56.5 mpg imp). The CO2 emission rating is 132 g/km. which is all damn impressive…but hey, if you’re an American buyer of a 5 Series, you’re not interested in stuff like that, right? 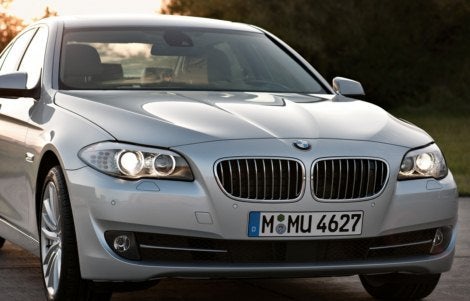 And the new 5 Series will also have this thing called BMW ConnectedDrive. It’s a ” driver assistance system” that includes such goodies as a Parking Assistant, Surround View, collision warning with application of the brakes in conjunction with Active Cruise Control plus Stop & Go, and a new Speed Limit Device, Lane Change Warning, Lane Departure Warning, Speed Limit Info, a Head-Up Display, BMW Night Vision with detection of individual persons, and a back-up camera. 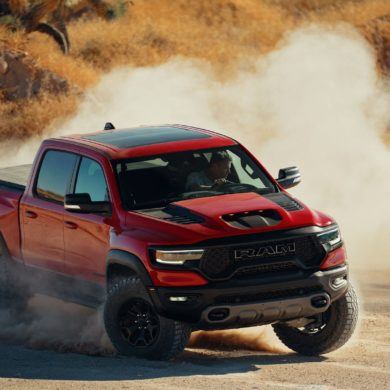