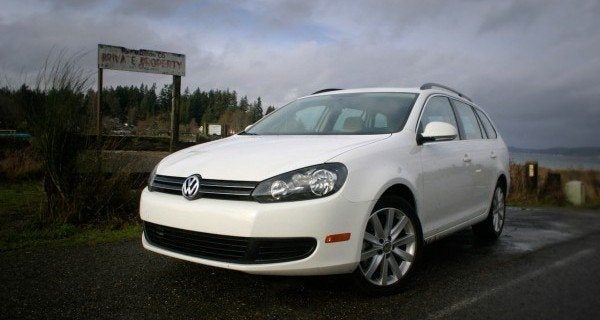 Last year, we drove a 2009 VW Jetta TDI sedan from Raleigh, NC to Washington DC and back on less than one tank of diesel, which ended up to be around 46 mpg on average. We praised the car not only on its exceptional fuel economy, but on its livability, excellent 6-speed manual transmission, peppy engine, affordability, and the fact that you can’t even tell it’s a diesel-powered engine while driving.

Last week, Volkswagen handed us the keys to the face-lifted 2010 Jetta TDI – but now it’s the larger SportWagen model with a 6-speed DSG automatic transmission.

There are a few changes this year in the 2010 Jetta TDI; most notably the face-lifted front-end (which I could have done without,) new interior trim design, and a few other little details. The most important part about the TDI model – the engine – remains unchanged. It’s still a peppy little 2.0-liter turbocharged four-cylinder clean diesel TDI producing only 140 horsepower, but a very impressive 236 lb-ft of torque. That’s where the peppiness comes in. And for a 3,285 lb station wagon, it feels downright fast at low speeds. 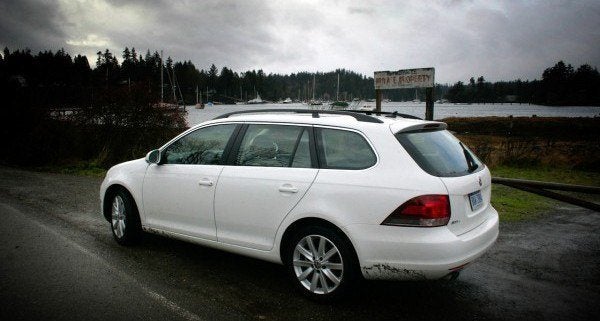 It rained for most of the week that we had the car, but fortunately good ol’ German engineering came to our rescue. It’s like the 2010 Jetta TDI didn’t even know it was pouring outside; the car felt solid and stable at any speed, and didn’t hesitate for a minute about taking a high-speed corner on slippery pavement. Plenty of room inside with comfortable seating, a high-quality interior, and a nifty panoramic sunroof makes the Jetta TDI SportWagen feel much more expensive than it is. The ride is comfortable all-around with good steering response and suspension, and the 30 mpg city, 42 mpg hwy fuel economy numbers will make any commuter jump for joy.

There were a few things I didn’t like about the new Jetta though. Throttle response while at low speeds is strange and takes some getting used to. From a stop, acceleration is jerky, as if the accelerator pedal is too sensitive. Push the pedal down a little bit and you don’t get any power, but push it down a centimeter further and you’re bound to suffer whiplash. I’m not sure what to blame this on; since this didn’t happen on the TDI we drove with a manual transmission, and I could lessen the effect while using the manual shift mode on the DSG, I’m determined it’s a problem with the auto transmission gearing. My only other gripe about the 2010 VW Jetta TDI SportWagen is that when trying to open the rear hatch with the key fob, it opened about half the time; the other half I had to open it manually. 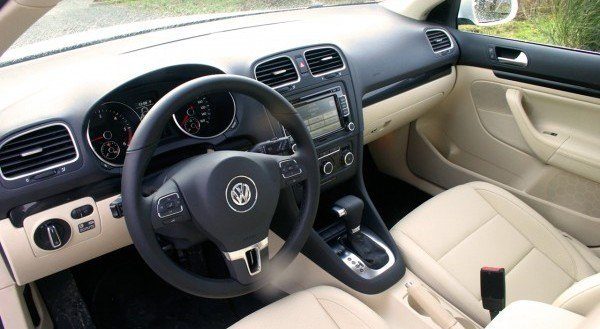 Despite my griping about the DSG gearbox, it’s a smooth transmission overall. While at speeds faster than a crawl, shifts are barely noticeable. Still, I’d opt for the 6-speed manual transmission.

The 2010 VW Jetta TDI starts at $22,830, not including the $1,300 Federal Income Tax Credit. SportWagen models are a bit more, starting at $24,310. The Jetta TDI comes standard with some impressive features including heated mirrors and washer nozzles, A/C, cruise, keyless entry, leather-wrapped steering wheel with multifunction controls, a tilt-and-telescoping steering column, heated eight-way-adjustable front seats, 16-inch alloy wheels, bluetooth, 10-speaker sound with a six-CD changer and standard auxiliary jack, and a trip computer. Plenty of options available, including the $1,300 panoramic sunroof (there goes the tax credit,) a few different wheels, a body kit, navigation, and all sorts of accessories. The DSG automatic transmission tacks on an extra $1,100.

While diesel fuel is back to being more expensive than regular gasoline now, the difference in price (about $0.20/gallon around me) isn’t significant enough to not consider a diesel. Where else can you get a mid-size wagon that gets 46 mpg on the highway, feels like a luxury car, and has this much standard equipment for under $25,000? 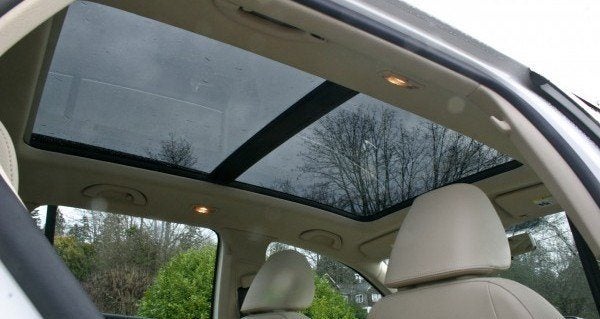 We didn’t do a photo shoot for the 2010 VW Jetta TDI SportWagen last week. Normally I would just take some stock photos off of Volkswagen’s website and use them, but they didn’t have any good ones, so I’m borrowing some from the good folks at Road & Track: