When a “2010 Mazda5 Minivan” showed up on our review schedule, I cringed a bit. “They know I hate minivans,” I thought, “why would they send me this?” In protest, I decided to not even run a review on the Mazda5.

Well, as it turns out, they might have known what they were doing.

Minivans, in general, are the epitome of boring. They’re big, slow, top-heavy, and incredibly bland. They have their place, of course, but mostly in the hands of soccer moms, schools, and businesses that need to carry around a bunch of people or equipment – not on a car blog dedicated to enthusiast cars. 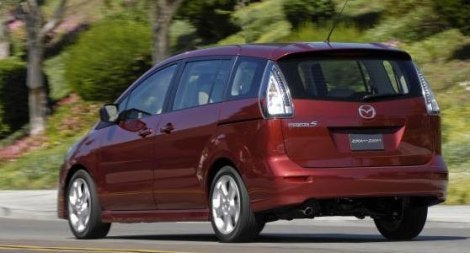 After driving the 2010 Mazda5 for a week, I no longer feel comfortable calling it a minivan. It has the defining factors – two sliding rear doors, three rows, and plenty of available tech – but it just doesn’t have the soul of a minivan…thank God.

Before we get ahead of ourselves, let’s talk about what exactly the Mazda5 is. From the inside and out, it looks identical to the boring old minivans you’re used to. Bland styling, huge sides and rear, and open interior. The dual sliding rear doors finish off the minivan moniker, but there are some factors that differentiate the Mazda5 from others.

First and foremost, the dimensions. The 2010 Mazda5 isn’t a minivan in the typical sense. It’s much smaller, to the point where it’s in its own class. The Mazda5 doesn’t have any direct competitors! The closest you get are full-size minivans like the Toyota Sienna, Nissan Quest, and Honda Odyssey, as well as some of the bigger wagons on the market. Since the Mazda5 is much smaller than every other minivan on the market, I think a more appropriate term for it is “microvan.”

On to the real shocker: the driving experience. The last thing I expected out of the 5 is a sporty drive, but I was surprised with sharp handling, decent suspension, a nimble attitude, and a peppy powertrain. The 2.3-liter four cylinder (the only available engine) pushes out 153 hp, which turns out to be perfectly adequate for this vehicle. In fact, it’s easy to squeal the tires just a bit from a stop; when’s the last time you’ve done that in a minivan?

A five-speed automatic transmission is standard across the line, but a five-speed manual is available on the base trim. Mazda is very good at injecting sporty characteristics into their cars, and the Mazda5 is no exception. A smooth ride and quiet cabin give the vehicle a quality feel. Seating, on the other hand, is similar to planting your butt on a milk crate. Hard and flat seats have absolutely no support in turns, and are not particularly comfortable for longer drives. The driver’s seat has vertical adjustment, thankfully, but doesn’t go down as far as I’d like. Sun visors don’t extend, making me lean forward to block the sun from blinding me.

Interior materials are the real downfall here. The whole inside is covered with hard, cheap plastic, making this microvan seem like a budget ride. Audio quality is tolerable, with no option to upgrade. Only one 12V outlet in front limits gadget use to one device. A DVD entertainment system is available to keep the kids entertained in the back. 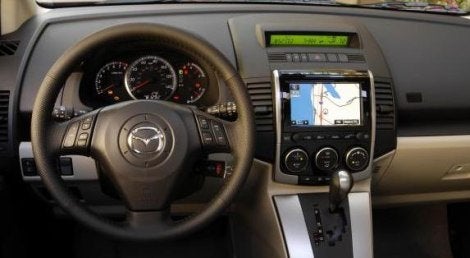 The main advantage of a minivan is present in the Mazda5, though slightly more limited. Three rows of seats carry up to six passengers, but storage space is limited unless you fold the third row down. The second row folds as well, leaving room for just about anything.

The 2010 Mazda5 starts at $17,995 for the base model with manual transmission, or $19,435 for the auto. Upgrade to the Touring package for $21,250 and you’ll get fog lights, power moonroof, LED tail lights, 6-disk CD changer, rear spoiler, and leather-wrapped steering wheel and shift knob. The Grand Touring trim ($23,005) adds HID low-beams, rain-sensing wipers, heated leather seats, bluetooth, security alarm, and adds the navigation option (for an extra $2k.) Our review model is a Touring trim and comes out to $22,480 after the Sirius satellite radio option. 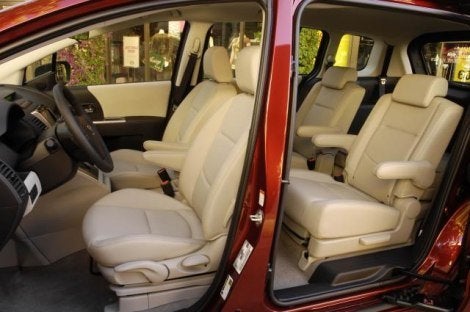