Ah, we knew it would happen sooner or later. Despite the new Taurus’ non-sporty nature, the infamous Taurus SHO reared its head and showed us some specs. It even looks good!

In short, the 2010 Ford Taurus SHO gets a 3.5-liter twin-turbo V6 pushing out 365 horsepower, an AWD drivetrain, and a paddle-shifting 6-speed gearbox. Wha? This doesn’t seem right, but it’s seriously impressive. Read on for more info: 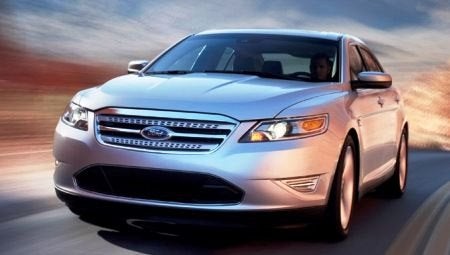 The original Taurus SHO first produced in 1989 gathered a loyal following of enthusiasts, starting online fan clubs and forums. When it was canceled in 1999, these enthusiasts demanded a return of the Super-High Output (SHO) Taurus. Ten years later, they get their wish. Ford listened closely to what the enthusiasts had to say about the new SHO and what they wanted out of it (they really didn’t want to screw this one up.)

The 2010 SHO, as stated above, will get a 365 horsepower twin-turbo 3.5-liter V6. While that’s not an incredibly high power rating from a twin turbo setup with a 3.5 liter displacement, Ford promises high responsiveness and minimal lag from the smaller turbos. The 6-speed auto-manual transmission offers paddle shifters, although I’m sure it will be a typical “I want to be a sports car” paddle system, which is just an automatic you can control shift times with, much like most tiptronic systems. These types of systems have very little practical use, other than making you feel cool. Of course the new Taurus SHO has a sport-tuned suspension, adding new shock absorbers, springs, stabilizer bars and strut mount bushings.

The SHO has always been about having a “sleeper” car – a fast car that looks the same as a slow one, surprising onlookers. In this case, Ford (and SHO enthusiasts) wanted to keep the Taurus’ conservative looks while being able to surprise those cocky Mustang drivers by blowing them away at stoplights. They went with the same idea in this model, changing only a few exterior items such as giving it bigger wheels, a subtle spoiler, and twin chrome exhaust tips. Inside, drivers get leather seats with suede inserts, a leather wrapped steering wheel, aluminum trim, and SHO branding here and there.