OK, scoops out on the 2010 Shelby Mustang (officially dubbed the Ford Shelby GT500), and it looks even better than the ’09s. There’s more power, and, get this, better mileage. Sure, we all want better gas mileage, but what Ford is touting is kind of comical. Still looks like a pretty damn good ride.

The 2010, like the previous versions, was developed by Ford\’s Special Vehicle Team (otherwise known by the letters SVT). The uber-Mustang delivers a more horsepower with an increase to a whomping 540HP. Similarly, the torque has increased to 510 ft.-lb., while SVT has increased downforce and reduced drag. There’s also new gearbox enhancements (always welcome with these guys, their trannys always being a sticking point for some drivers). There’s also a standard 3.55:1 rear axle ratio, so the 2010 Shelby GT500 should accelerate like nobody’s business. 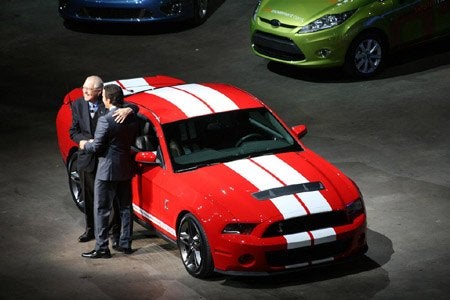 Here’s my favorite part though: The new for 2010 Ford Shelby GT500 provides better highway fuel efficiency – up 2 mpg compared with the outgoing model. Ford even mentions this in the headline of their press release. Guess that goes to show you that there must be some sort of PR directive to make everything they can look more Earth friendly.

It’s funny, because really, if you’re going to plunk down the change to buy a Ford Shelby GT500, (no pricing as of yet, but you know it won’t be cheap), saving a few dollars on gas isn’t going to be much of a concern for you. But it’s still nice that Ford thought of doing this. 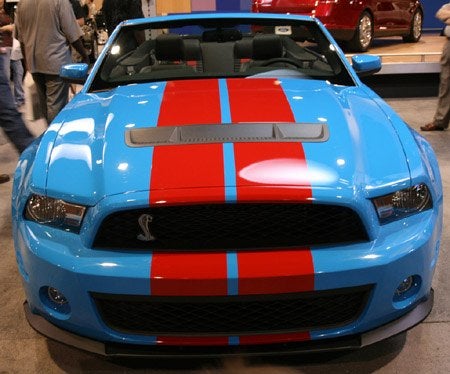 And they dragged those improved MPG figures from a pretty impressive mill. The 2010 Shelby GT500 is powered by a supercharged and intercooled 5.4-liter dual overhead cam V-8 engine cranking out 540 horsepower at 6,200 rpm and 510 ft.-lb. of torque at 4,500 rpm. The engine redlines at 6,250 rpm. The car\’s power dome hood is made from aluminum and not only adds to the Shelby\’s appearance, it helps cool the engine through a bitchin’ hood extractor.

And speaking of looks, there are new exterior bit & bobs. In addition to the hood extractor to remove heat from the engine, there’s a \”Gurney Flap\” spoiler that produces more rear downforce.

The 2010 Shelby GT500 will be in dealer showrooms this spring. 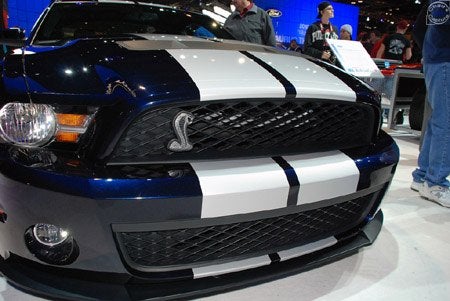