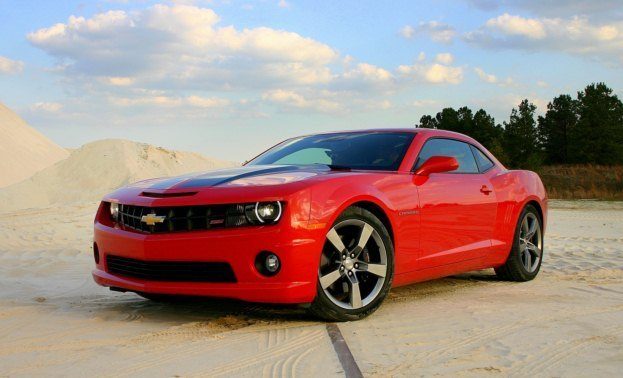 We’ve been waiting for some time to get in the new Camaro SS to review. Chevy finally sent us one, and we drove the living hell out of it. It’s exactly how I would take it, too – Inferno Orange with Cyber Gray racing stripes on the outside, black and orange leather with orange accent stitching inside, lining the steering wheel, shift knob, armrests center console, and seats. The Camaro’s legendary fire-breathing 6.2-liter V8 engine producing 426 horsepower was equipped, mated to a 6-speed manual transmission. It was even equipped with the popular RS Package – complete with 20-inch aluminum wheels, halo rings around the HID headlights, and tinted tail lamps.

So how does the SS compare to the 304 hp V6-powered Camaro? Two totally different cars for two very different buyers. Someone shopping for the V8 Camaro won’t glance twice at the V6 version. Not that the V6 isn’t quick, but the V8 is another story completely… 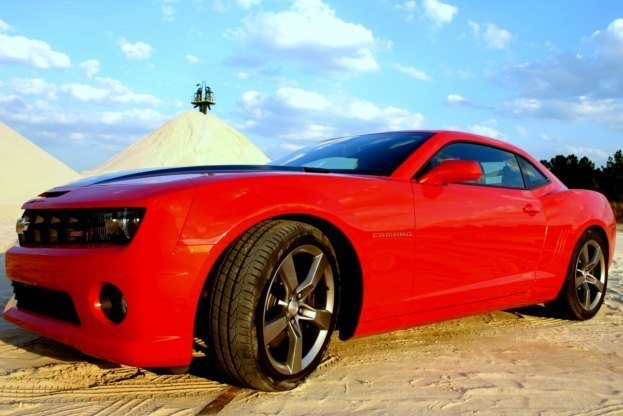 Zero to 60 mph takes only 4.6 seconds. Keep the pedal down and the quarter mile passes by in less than 13 seconds, helped out by “Stabilitrak Competitive Mode” – GM’s fancy term for launch control. Want to scare the salesman on your test drive? Press the “fun button” a few times (traction control) until the LCD screen shows that you’re in competition mode. Hold down the clutch with the left foot, throttle to the floor with the right. The RPMs will hold at somewhere around 3000 until you drop the clutch. The rear tires light up instantly with plenty of noise and show, until the tread catches onto the pavement and you take off with “optimal wheelspin.” Keep going and you’ll be at triple digits in no time, and you won’t even realize it. And that’s actually my biggest complaint about the car…

There’s no drama, and little sense of speed. The exhaust note sounds great but it’s not as loud as it should be. Even though the performance is good, I think it could be better. 426 horsepower is quite a kick in the pants, but it feels like there are all sorts of electronic nannys and computers holding it back from what it really could do, making it feel a tad…soft. Yes, it’s easier to drive, and yes, it’s safer. But I think a car that is emulating the high-powered musclecars of the “good ol’ days” should be more exciting, loud, and brash. What I’d like to see is a stripped-down version of the SS – remove all the gizmos and gadgets and comfort features, keep all the appearance and performance stuff, throw on a high-flow exhaust, and open up all 426 horsepower. The main culprit here is the weight – at 3849 lbs, it’s no lightweight, and you can feel it. 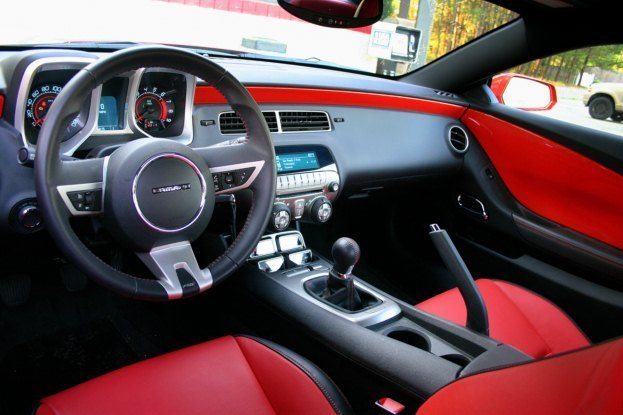 Having said that, the 2010 Chevy Camaro SS is a blast to drive, great value for the money, and one of the best looking cars on the road. And in case you were getting concerned – yes, I would buy this car. Between all three contenders in the “musclecar wars” (Camaro, Mustang, and Challenger,) I think Chevy did the best job getting down a truly retro feel and appearance while keeping the features and technology modern. But of course, that’s all very subjective. I like how you sit far down into the car – even my giant 6’4″ frame has to move the seat up vertically to see over the dash.

The interior, by the way, could use a bit of a touch-up. The cheap plastic trim lining the doors and dash are…cheap. Really, Chevy, everyone who sat in my test car immediately gave a lemon-sour face after seeing, then knocking on that plastic. The orange color of the plastic (optional) is a nice touch and looks great until you get up close. I know colored leather would be expensive, but damn would that look nice. Aside from that, the 4-pack of gauges are a nice touch, the aqua blue and red lettering on the instrument panel accent the retro design nicely, and the simple audio/climate control center is relieving. My biggest complaint about the styling is limited visibility. The hunkered-up style makes for very narrow windows all-around. A giant rearview mirror plastered in the middle of your forward-viewing angle doesn’t help, but overall the sacrifice is completely worth the styling. Aside from the mirror, don’t change a thing. 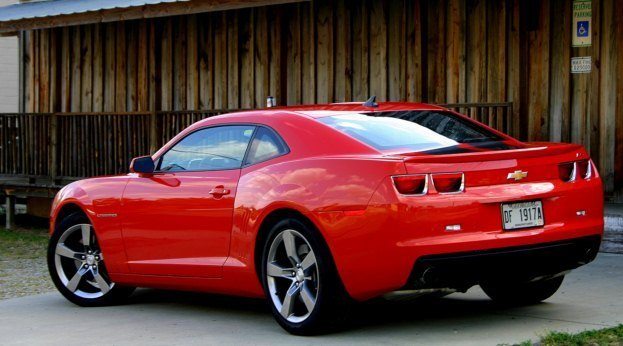 Now that the Camaro has been around for a bit, the initial novelty has worn off and we’re beginning to the see the car for what it is. It’s still great looking and it’s still a bargain, dollar-for-horsepower. In my opinion, it’s beginning to look like a cartoon – an over-representation of itself. Not that it’s a bad thing; it’s just that we’re not used to cars as charismatic as the Camaro. It’s going to be interesting to see how Chevy alters the Camaro’s styling after a few years to keep it fresh – I’m not sure where they can go from here.

Another thing to keep in mind is with Ford’s excellent updated 5.0 Mustang GT, Chevy is going to have to stay on their toes to make the Camaro a viable contender next year. The new Mustang is smaller, lighter, and faster – I’d love to see Chevy give the Camaro a similar treatment.

Overall, the Camaro is still an excellent choice for a modern day musclecar. Even though it feels a bit sluggish for having 426 hp (a result of its bulbous proportions and weight,) the Camaro is a great value. A big focus is on style, however, which limits its abilities as a performance car. Not that there’s anything wrong with that, of course, but it’s something to keep in mind while shopping around. With some changes to its interior materials, some better outward visibility, and a diet, the Camaro can easily out-muscle the new Mustang and Challenger. 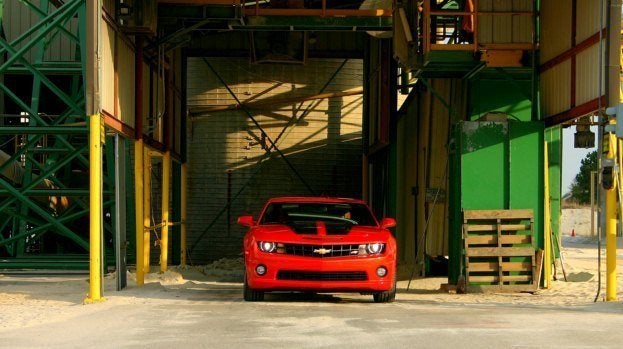 If you’re looking at the V8-powered Camaro SS, you’ll want to check out the Dodge Challenger SRT8 and 2011 Ford Mustang GT. While each has its own benefits and detriments, it usually comes down to a simple matter of personal preference. If you decide on the Camaro, be careful with the options – the base price of $22,680 for the V6 ($30,945 for the V8) increases VERY quickly when you start adding on from the huge list of packages and accessories. One more thing – get the six-speed manual. The wimpy automatic robs 26 hp from the car.