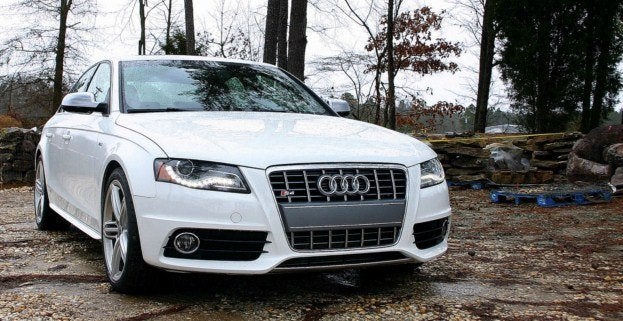 If you lived anywhere near the Raleigh, NC area in late 2008, you might have heard a mysterious and loud blood-curdling scream off in the distance. Yup, that was me when I found out the Audi decided to replace their magnificent 4.2-liter, 354 hp V8 engine with a whiny V6 engine producing 333 hp. By whiny, of course, I mean supercharged (despite the weird “V6T” badge.) It was love at first exhaust note, me and the V8. We met by a mutual friend, the 2009 Audi S5. Between her smooth, powerful acceleration, the S5’s silky 6-speed manual transmission, and the intoxicating, throaty exhaust note, I would never think it would come to an end. But alas, 2010 is the last model year my beloved V8 will be present in the S5 Coupe.

The 2010 Audi S4 never had a chance to meet the V8 – based on the A4, which was redesigned last year, the 2010 S4 sports the newfangled supercharged V6 Audi seems so fond of. What do I have against the V6, you ask? The numbers are right, after all. The new V6 puts out only 7 hp less than the old V8 while providing 23 more lb-ft of torque. Plus, since the smaller engine is lighter, the V6-powered car is actually quicker than the one with the V8. This also helps the V6 get 18 mpg in the city and 28 on the hwy, which is significantly above the V8’s 14/22 mpg rating. How could I argue with that? Oh, and the price is a little better too. Damn, they’re making this a tough argument to win. 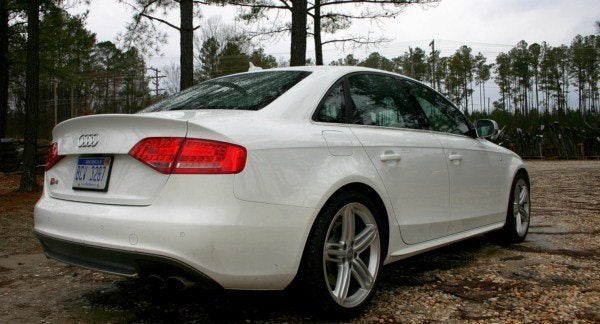 Here’s the thing: any time you can engineer an engine to produce more power than a larger engine and get better fuel economy out of it, it just makes sense to make the damn thing. I congratulate Audi on that; on paper, it looks great. But that’s the thing – enthusiast cars aren’t about making sense. They’re about pushing limits, and they’re about the sound an engine makes. They’re about the way the car makes you feel. But is the 2010 Audi S4 made for enthusiasts like the last one, or are they aiming for A4 buyers that just want more oomph?

Here’s another thing: The V6-powered S4 is one helluva car. It’s fast (0 to 60 takes 4.9 seconds with the manual, 5.1 with Tiptronic,) gets excellent fuel economy, provides a ton of tech, looks just as beautiful as ever, and still sounds pretty damn good. Not as good as the V8, of course, but still pretty good, given a hard press of the throttle.

Our review model came to us wielding quattro AWD (as all S4s do) and the optional ($1,400) 7-speed S-tronic automatic transmission. It’s a good transmission that gets even better when changing gears yourself via steering-wheel-mounted paddle shifters, although I wish they were column-mounted instead. Ours is a Prestige model; a $6,100 option adding 19-inch alloys, Bang & Olufsen premium sound, proximity key, navigation, voice control, auto-dimming mirrors, and driver memory. We also had Audi Drive Select, which is a sort of selectable ride control giving Comfort, Auto, and Dynamic modes, each adjusting suspension, steering, and throttle response appropriately. For more aggressive drivers, check the $1,100 Rear Sport Differential box, which will have your S4 feeling like an RWD beast.

The cabin is inviting and luxurious, as you’d expect from any Audi. Optional silk nappa leather lined the nicely bolstered seats; leather and Alcantara-trimmed seats come standard. The beautiful interior design, from the soft red glow at night, the high-quality materials, and crystal-clear LCD instrument panel, make me love Audi every time I get into one.

And why does the badge say “V6 T” if it’s supercharged?

The 2010 Audi S4’s biggest rival is the BMW 335i xDrive, which is a few grand cheaper than the Audi but has less power and worse fuel economy. Be sure to drive both cars, but just remember – everyone has a freaking 3-Series. Then again, there’s a reason for that.

Also, it’s worth noting that 15 minutes into driving the car, the water pump blew up, and I had to get towed to the nearest Audi dealership. It was fixed for no cost (under warranty,) but it’s something to watch out for. The service manager at the dealer informed me they’ve been seeing a lot of S4s come in for the same reason.