Any day that you’re invited to drive a new Ferrari is a good day. Sadly, this particular Saturday morning was cold and rainy – a general recipe for miserable. We weren’t going to let that ruin our time though; we’ve been waiting to get into the new Ferrari California for months now, so I wasn’t about to pass on the chance to drive it.

When Ferrari first unveiled the California, it left a sour taste in my mouth. To me, it just doesn’t seem like a true Ferrari. It’s not very attractive, for one, suffering from odd lumps all over, a bulbous rear-end, and an awkward front. Recently, Ferrari seems to be moving away from their beautiful, sculpted designs of the past and more towards funky shapes and weird bulges. The California also represents many new firsts for Ferrari, including their first front-engine V8, first retractable hardtop, and first seven-speed dual-clutch gearbox.

With so many changes, firsts, and weird design elements, some people are having problems calling the 2010 California a true Ferrari. But we all know the true defining factor of any sports car is how it drives… Thanks to Hank and the fine folks at Foreign Cars Italia, we get to find out for ourselves. When we walked outside to the 2010 Nero Black Ferrari California sitting under an overhang, the first thing I noticed was that it looks better in person than in pictures, which is typical of supercars in general. Still bulbous, still lumpy, still not what we’re used to in a Ferrari, and still not stunning, but not quite as ugly as I thought.

Climbing into the driver’s seat was a bit surprising – the driver has tons of room inside, which is good for a 6’4″ guy like me. The interior is sculpted beautifully as all Ferraris are, with high-quality aluminum and supple leather abound. The steering wheel is a sort of “baby F430” wheel with a three-way selectable manettino switch for different road conditions. The instrument panel features a huge tachometer in the center with a speedometer on one side and a crystal-clear TFT display on the other. Our model has special red stitching running along the entire interior, which looks great.

Insert the key, hold the “Engine Start” button, and the new direct fuel-injected 4.3-liter V8 engine roars to life with a hollow growl that literally sends shivers down my spine every time I hear it. It definitely sounds better than it looks. Foot on the brake, press the “Auto” button to get it into manual mode (it annoyingly defaults to automatic mode every time you start it,) pull the column-mounted paddle on the right to get into first gear, and off we go. 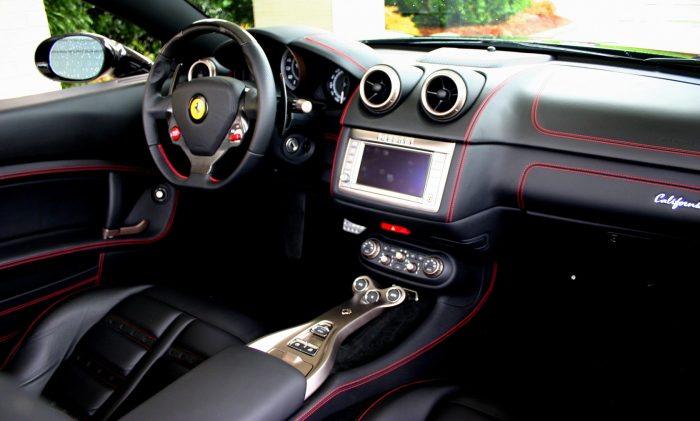 Driving the 2010 Ferrari California, even in the rain, is just…pleasant. It doesn’t have quite the sense of urgency as the F430, nor is it supposed to. It’s as if Ferrari is trying to bridge the gap between their mid-engine V8 cars and their front-engine V12 GT cruisers. This car isn’t meant for the same person that buys a 430 Scuderia, it’s for the style-conscious driver who buys an Aston Martin Volante or Porsche 911 Cabrio. A retractable hardtop on a Ferrari has never been done before, and the California is heavier than the bigger 599 Fiorano. The point isn’t to be lightweight and quick around a track, it’s to be an eye-catching GT convertible for cruising Las Vegas Blvd.

That’s not to say the California is a slow-poke; the 460 hp and 357 lb-ft 4.3-liter V8 packs a punch, and its responsiveness will surprise you even when you expect it. The seven-speed dual-clutch gearbox is utter perfection. Gear changes are silky-smooth, yet somehow lightning-fast. I still haven’t figured out how they did that. This marks the first time I’d take the auto gearbox over the manual.

Stick the car into Sport mode for even quicker shifting, a firmer suspension, tighter steering response, and a traction control system that lets you slide the tail end out a bit around turns. Sadly, I didn’t get to take full advantage of Sport mode, seeing as how it was raining just enough to thwart my intentions. Under dry conditions, however, the 460 ponies will get you from a stop to 62 mph in less than four seconds, up to a top speed of 193 mph. 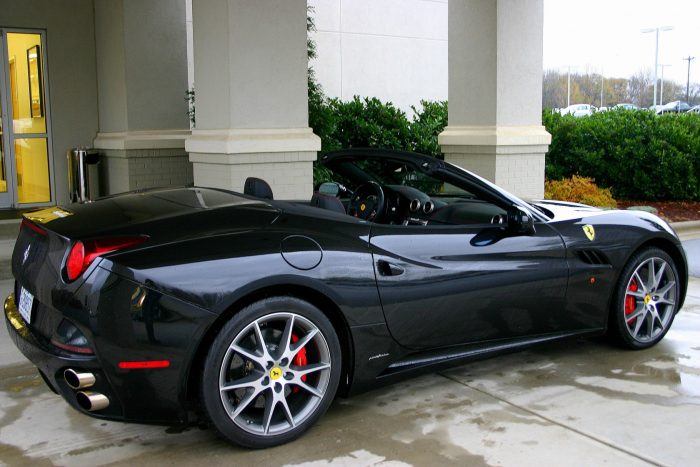 Alas, the rain didn’t allow the California’s retractable hardtop to come down either. Ferrari assures me that with the push of a button, the top will fold itself into the trunk completely in only 14 seconds. Although I wasn’t able to experience the open-top experience in the California, I can imagine the primary benefit is that there is no longer a roof in between you and the beautiful exhaust note. Driving through a long tunnel with the top down would be heaven.

The 2010 Ferrari California starts at $192,000 – right up there with the F430. Add a few options and the price jumps significantly; our tester ran $221,148. Fairly pricey considering the “entry-level Ferrari” idea most people have about it. Actually that’s a bit unfair – the California isn’t any more “entry-level” than an F430, it’s just different. Competitors include the upcoming 2011 Maserati GranCabrio, Lamborghini Gallardo Spyder, Aston Martin DB9 Volante, Bentley Continental GTC, and of course the Porsche 911 Turbo Cabriolet. 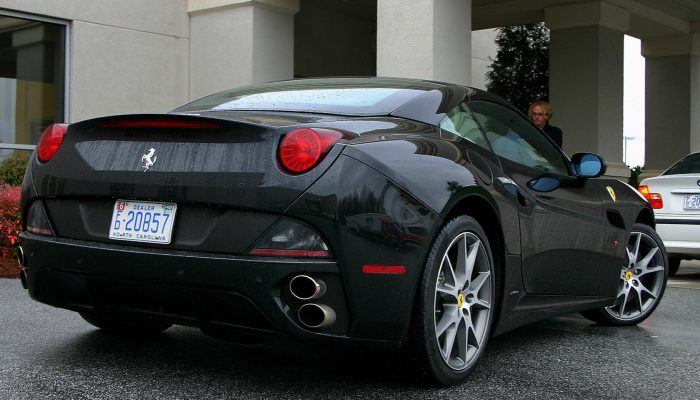 So, is it a proper Ferrari? Well, I’ve always known Ferraris to be rolling works of art that can rip your face off with a slight depression of the throttle. The California isn’t like that. It’s a great car, don’t get me wrong, but it’s not beautiful or raw or viscous. It’s a very pleasant, relatively tame car that can be driven top-down every day in comfort.

For the money, I’d take an F430 over the California any day, but I’ve no doubt there are plenty of buyers out there looking for a less expensive Ferrari GT car. The 2010 Ferrari California certainly fits that bill.