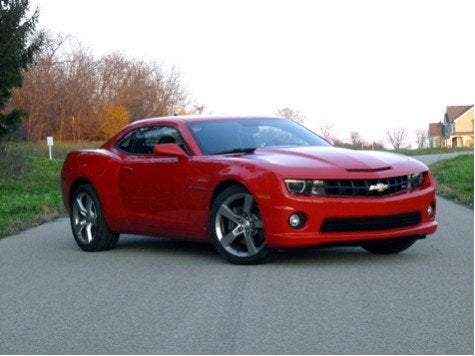 When I was in possession of my first 2010 Camaro 2LT RS back in June, I was one of the first people to be behind the wheel of General Motors’ new muscle car for the entire Midwest. Equipped with the excellent 3.6-liter six-cylinder engine donated by the Cadillac CTS, camera phones and kids fresh from Transformers 2 followed me everywhere.

Fast forward six months, and I get a shot at the bigger brother, the Camaro SS. The SS’ 6.2-liter LS3 V8 sends a pavement-shredding 426 horsepower through a six-speed Tremec manual transmission and out the rear wheels. (A 400 horsepower L98 V8 swaps places if ordered with the six-speed automatic.)

After a week of burbling around town, leaving long black streaks on country roads, and continuing to cause whiplash from observers, I can confirm Chevrolet has truly made an amazing car. The difference between each version of the Camaro is only noticeable from behind the wheel. Sure, the front bumper has a subtle chin spoiler incorporated into the front bumper as well as a small vent built into the top of the front-end. Behind the optional RS-packaged 20-inch chrome wheels are large four-piston brake calipers stamped Brembo and there are two tiny SS badges placed on the nose and trunk lid.

The inside has the same cool, but ergonomically-challenged, retro-modern interior, with the retro dual analog gauges, optional secondary gauges down low in the center console, and two large rotary controls with HVAC controls located in the center. The only change really are the SS-embroidered seats, which come with additional side bolstering and are wrapped in leather fit enough for a Bentley. Of course, you still cannot see out of the damn thing, the backseat is worthless, and good luck getting anything larger than grocery bags through the tiny opening. So little change inside and out. What is the big deal with this car then? Go ahead and fire up the big V8 under the long, sloping hood. Then smile. 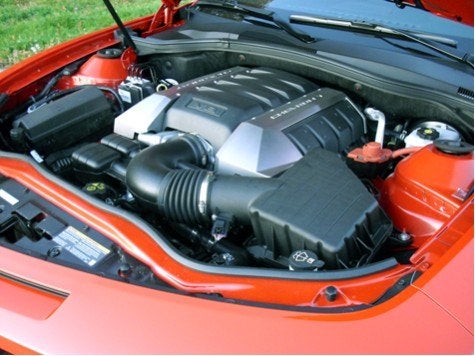 Bringing 420 pound-feet of torque to life creates a quiet, but baritone burble. A huge change from the raspy, higher-pitched note created by the V6. Light raps on the skinny pedal turns this good-looking red guy into The Hulk, with a deep, barrel-chested roar from the dual exhaust outlets. I can’t wait any longer: Grab the leather-wrapped gear selector and put the transmission into first. Disable the traction and Stabilitrak, rev to about four grand, and drop the clutch.

The LS3 roars with a noise that would scare Zeus and the twenty-inch Pirelli P-Zeros fight for traction as Chevrolet’s ultimate muscle car warps the pavement underneath. With the independent rear-end, there is little wheelhop, which helps the Camaro pull off a sub-five second 0-60. The car just never stops pulling and is able to chirp all the way through third.

But wait, what is that ahead? A corner? A slight gasp escapes my lips, but I shouldn’t worry as the SS receives a much more aggressive suspension set up than the six-cylinder has. Enter the corner fast and put those Brembos to use. The multiple pistons bite hard on the large rotors, causing a bit of front-end dive, but no wiggle or loss of composure. Saw the steering wheel into the corner and there is a much more noticeable sense of immediacy and purpose. It has a greater presence and feel than there is in the 304-horsepower car.

The front-end communicates a great deal better than before and is much more planted in the corner, whereas the V6 felt a bit soft and floppy. The suspension loads the g-forces with a surprising firmness and balance not expected in this type of vehicle.

Even giving the throttle some power, the rear end never feels loose, never feels disconnected from the rest of the car. The only real negatives is there is still too much understeer built into the suspension, the clutch is far too rubberband-like in everyday usage, and the Camaro still feels a bit bloated when pushed hard.

While I had the Camaro SS, I let my test driver from before, Ryan Love, take a spin in it. After an hour behind the wheel, he loved the power and the more control he felt compared to the V6 version. However, he felt too isolated from it all.

“I love the power. It’s so smooth,” he said. “The handling is also better, with less roll and understeer. However, it’s hard to tell how fast you’re going, and the engine doesn’t feel like it produces a lot of torque compared to the older generation, mostly because this Camaro is so quiet and smooth.”

While it may be fast, the Camaro does it with an amazing amount of polish. Sure, you can hear the primal noise of the V8, but there are no buzzes, rattles or vibrations permeating inside of the vehicle. The only vibration felt is through the gearbox, which acts as kind of a reminder there is something brewing at the other end of that transmission.

The plastics are very good inside, the leather is supple. The ride is polished, with firmness when you need it and comfort when you want it. The engine underneath the hood was put together in a clean, uncluttered design. The paint had very little orange peel, and the cherry red was beautiful on a sunny day.

Despite a few foibles, the new Camaro is a terrific car. It is not for everyone. For what it is and what it can do, there is little compromise. For just under 37 grand for a car packed with power everything, heated leather seating, an epic Boston Acoustics stereo, OnStar, and Bluetooth as some of the standard features along with the driving prowess and power this Chevy offers, it really is hard to beat.