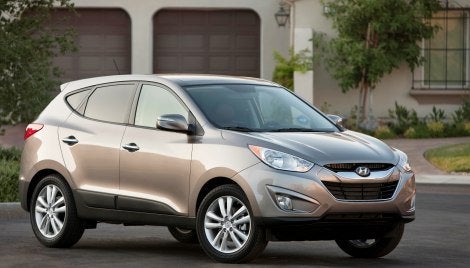 In Hyundai’s next step to rid themselves of their boring image, they’ve unveiled a completely redone Tucson crossover SUV for 2010 at the LA Auto Show. The new Tucson CUV was designed entirely at Hyundai’s European design center in Frankfurt, and it shows. The new Tucson has more interior room, better tech and fuel economy, and a more aggressive design following Hyundai’s “Fluidic Sculpture” design trend.

The 2010 Hyundai Tucson is truly a next-generation of the Crossover, employing weight-saving techniques, a new engine, larger dimensions and cargo capacity, and added technology such as Downhill Brake Control, Hillstart Assist, couch-screen navigation, and a panoramic sunroof. Read on for more info… 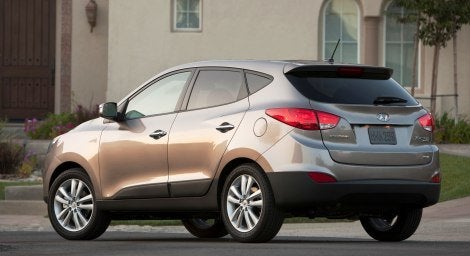 The new design is a “sports car-like” theme, which comes across in its muscular, flowing lines, aggressive front-end, swept head and tail lights, and 18-inch alloy wheels. Hyundai is hoping to attract a younger crowd with the 2010 Tucson, which I think might just work.

The featured engine is a 176 hp, 2.4-liter four-banger mated to a 6-speed automatic transmission, getting about the same power as the old V6 engine but with 20% better fuel economy than the old four-cylinder. That’s impressive, especially considering that it gets 23 city / 31 hwy mpg (FWD) – well above that of its closest competitors, with more power. The AWD Tucson will get 21/28 mpg, also higher than anything else out there. For 2011, Hyundai will introduce a high-mileage, lower priced Tucson “Blue” model which promises exceptional fuel economy through the use of a 2.0-liter engine, improved aerodynamics, low rolling-resistance tires, and reduced final drive ratios. 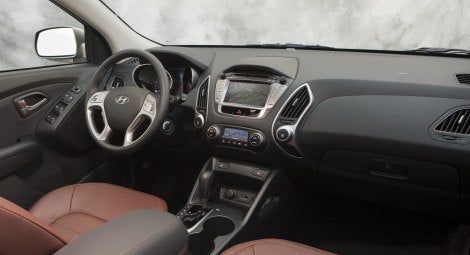 Now that 6-speed transmissions are all but expected in our new cars, the Tucson delivers well, offering a 6-speed manual or automatic with manual shift mode. The 6-speed auto is 26 lbs lighter than the outgoing 5-speed and has less moving parts, helping to increase durability and lower cost. The transmission includes lifetime-lasting automatic transmission fluid, which never needs to be replaced.

The interior in the 2010 Hyundai Tucson has been redesigned, giving driver and passengers more room, more cargo room than the larger Infiniti FX, and tons of storage areas. Hyundai has integrated their blue interior lighting scheme which looks great, and added standard power accessories and remote keyless entry. A panoramic sunroof, bluetooth, and steering wheels controls are optional, along with leather heated fronts seats, automatic headlights, navigation with rearview camera and plenty of other stuff we’re used to by now. The new Tucson is a huge step up from last year’s model, and will be available starting this month. Pricing hasn’t yet been announced.