Ford’s modern recreation of their GT40 racer from the 1960s might have finished its production run, but the tuners sure aren’t through with it. Geiger, a German tuning firm has given the race car for the road a once over. Not that there’s anything wrong with that … although I might take issue with their choice of colors.

GeigerCars is a German tuning firm from Munich that specializes in working on American cars, rather than the traditional Porsches or BMWs or other home market offerings. This is their third big to-do car after turning out a Dodge Challenger SRT-8 and a Corvette Z06 Bi-Turbo. The bottom line on those cars, if you consider horsepower to be the bottom line (and most of us do) is 569 HP for the Dodge Challenger SRT-8 and 890 HP for the Corvette Z06 Bi-Turbo. GeigerCars calls their latest effort the “Geiger HP 790”, and they also call the color “eye-catching bright green”. Well it IS hard to miss, I’ll give them that.

Geiger squeezed the bajeebus out of the engine, and by cranking the boost up garnered a 240 HP increase from the stock 5.4 liter V8 engine allowing it to reach a peak of 790 horsepower. The Germans did this by ditching the stock 2.3 liter capacity blower and fitting a more powerful 4.0 liter compressor that is now cranked up to over 1.25 bars of boost. Geiger also fitted larger throttle valves and a sports air filter. They also up-rated the engine and gear cooling systems as well as engine electrics. The blower-enhanced V8 reaches maximum power at 6320 rpm and its maximum grunt of 863 Newton meters arrives at just 4600 revolutions. Geiger has also specially developed a coilover suspension for the car that features adjustable pressure and rebound damping. They’ve also lowered the ride height 60-millimeters and mounted some matt black alloy wheels (sadly outlined in the car color) that are 9×20 inchers up front and 11×21 at the rear. Tires are Dunlop SP Sport Maxxs, 245/35R20 on the front and 325/30R21s out back.

No, they didn’t mention what the whole thing will cost you. 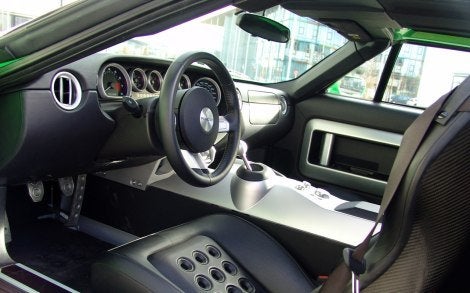 Red is supposed to be the standard colour of warning. US car specialists GeigerCars.de from Munich have turned this established wisdom on its head, presenting their hottest shot with eye-catching bright green paintwork. The Ford GT “Geiger HP 790” is the third star after the Dodge Challenger SRT-8 (569 HP) and the Corvette Z06 Bi-Turbo (890 HP).

Karl Geiger’s latest creation lives up to its name: the super sports car’s 5.4 liter V8 engine can reach a terrific 790 horsepower, an impressive 240 HP more than its series equivalent. The source of this explosion of power? Above all the replacement of the series-produced 2.3 liter with a more powerful 4.0 liter compressor which blasts the combustion chamber at over 1.25 bars. Larger throttle valves and a sports filter were also installed to supply the eight cylinders with even more fresh air. The engine and gear cooling systems had of course also to be adjusted to the new design as well as engine electrics.
Geiger HP 790 shoots to 100km/h in just 3.6 seconds, breaks the 200km/h mark 6 seconds later and reaches 300 kilometers an hour in only 22.8 seconds – all this to bloodcurdling roars from the two 110-millimetre sports exhaust tail pipes – an in house development. Thrust and air resistance don’t balance until you hit 360km/h. The supercharged V8 reaches maximum power at 6320 rpm and its maximum torque – 863 Newton meters – at just 4600 revolutions.
No question that a ride like this is not for the beginner, but experienced drivers will find the specially developed coilover suspension a great asset. Its hydraulic shock absorbers have adjustable pressure and rebound damping which can be set to suit drivers’ needs and preferences – and of course the terrain.
Low and wide: the classic Ford sports car proportions are taken even further with 60-millimetere lowering. The wheel housing can’t high superb matt black alloy wheels outlined in the car colour, mounted in 9×20 inches at the front and an impressive 11×21 at the rear. 245/35R20 Dunlop SP Sport Maxx tyres on the front axle ensure precise transmission of wheel commands whilst the drive axle 325/30R21 tyres constantly fight for grip and traction – if only so they don’t disappear in a cloud of blue smoke.