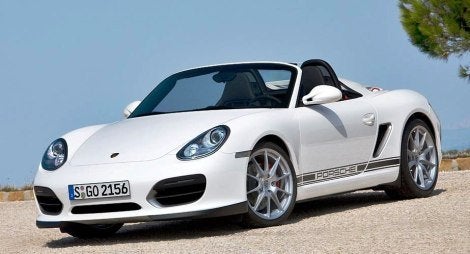 Here’s something unexpected: Porsche will be showing something called the Boxster Spyder at the upcoming Los Angeles Auto Show. Not only does the car look interesting, and what Porsche has said about it continues that interest, but also it is said to be lightweight (Porsche getting back to its roots?) and, they are also saying it is headed for production.

Porsche says that the Boxster Spyder will be the new top of the line version of the Porsche Boxster. And the good news is that it will tip the scales at just 1,275 kg or 2,811 lb, making the Boxster Spyder the lightest model in the entire range of Porsche cars. Porsche says that “this new mid-engined roadster represents the true, purist form of the Porsche sports car – light, powerful, consistently open, and very efficient.” 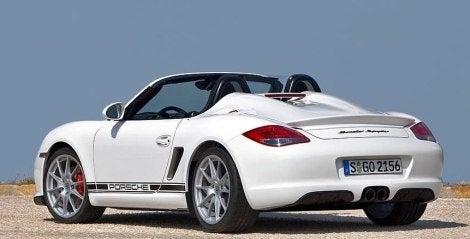 The Boxster Spyder will hit the market in February 2010 and be the third version in the Boxster range, joining the Boxster and Boxster S. The light soft top extends far to the rear serving and when closed, the soft top, together with the extra-low side windows and the two striking bulges on the single-piece rear lid, boasts a stretched and sleek silhouette suggestive of the Carrera GT.

In addition to the lower weight than the Boxster Spyder also gets an all-new sports suspension and plant buried somewhere in the middle of the car is a 3.4-liter six-cylinder mill with Direct Fuel Injection with a maximum output is 320 bhp, which is 10 bhp more than in the current Boxster S.

The Boxster Spyder is outfitted with the Porsche PDK semi-auto box and the Sports Chrono Package. When you switch on the Launch Control, the new Spyder can go from zero to 100 km/h in 4.8 seconds. Top speed is 267 km/h or 166 mph – with the roof open.

The cost for European customers will be 53,100 Euro. 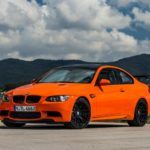