Toyotas Getting Minds of Their Own, Killing Drivers 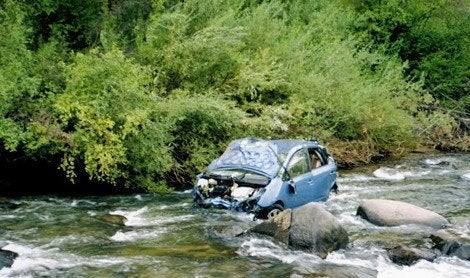 I knew this day would come. The movies warned us, and we didn’t listen. The robots have developed a mind of their own and are targeting drivers of Toyota and Lexus vehicles.

There have been reports of hundreds of recent accidents and 16 deaths resulting in what experts are calling an electronics failure (and what Toyota is calling a stuck floor mat) that results in the throttle getting stuck open. The affected cars are accelerating to around 100 mph, and no amount of braking stops the car. These runaway Toyotas are making buyers question their purchasing decision, and demanding answers from Toyota.

An estimated 2000 cases of this glitch have been reported in Toyota Camry, Prius, and Lexus cars. Toyota denies any issue with electronics in the cars, but instead calls the incidents a result of “oversized floor mats” sticking open the throttle. “I’m absolutely certain that in my situation, it was not the floor mats,” Elizabeth James told ABC News about her experience with a Toyota Prius suddenly accelerating past 90 mph in Denver, CO. Toyota refused to speak with ABC News about the incidents, insisting that it’s the floor mats. Executive Bob Daly posted on their website, “Some news reports suggest there may be other causes of unintended acceleration, speculating about electronic engine control systems, braking performance or electro-magnetic interference among other theories. There is no evidence to support these theories.” Bulent Ezal’s Toyota Camry took off and plunged over this 100 ft cliff, killing his wife of 46 years

If your car ever experiences a stuck open throttle and can’t stop, slam on the brakes and immediately shift the car into neutral. This will disconnect the transmission from the engine and allow your car to stop safely. Brakes alone will not work, since most cars’ brakes will not override the throttle. German cars such as VW, however, have safety features built-in to allow the brake to override the throttle; a feature maybe other car manufacturers should look into.

The Toyota Recall: Just How Bad Is It?