The 2009 Toyota Venza is quite an interesting vehicle. According to Toyota’s comparison website, the Venza’s main competitors are the Nissan Altima and Honda Accord, but the Venza is obviously no mid-size sedan. It looks more like a small crossover SUV, or maybe a wagon, but smaller than both. It’s the length of a Toyota Camry, the width of the Highlander, and in between the two for every other dimension. Despite never figuring out what the Venza really is, I found one important thing about it: it’s incredibly useful.

Sitting between the Toyota Camry and Highlander in size certainly has its upsides. Most people don’t need as much room as an SUV gives them, but need more versatility than a sedan, and that’s where the Venza comes in, essentially creating its own class of vehicle in between a car and SUV. 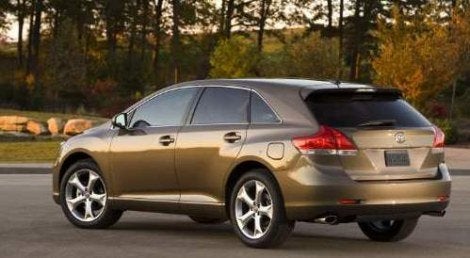 Classified as a 5-Door Sedan, the Toyota Venza is all-new for 2009. Just like the Camry and Highlander it sits between, the Venza’s engine options are a 182 horsepower 2.7-liter four-cylinder, or a much more capable 3.5-liter V6 producing 268 hp. Both engines are mated to a 6-speed sequential automatic transmission, which is a good choice for this car. Either engine can also be had with FWD or AWD layouts.

The 2009 Toyota Venza starts at $25,975. Add about $1500 for the AWD setup and around $1800 for the V6. Our review model had the V6, which I found to be a very smooth and powerful engine; perfect for this car. The 6-speed automatic compliments the engine well, although it can be slow to downshift when you need to speed up now. As a test, I was traveling at 30 mph, floored the throttle, and counted a full 2.5 seconds before the transmission kicked me down into gear and started to pull hard. Otherwise a great and smooth setup, it needs to be more responsive. 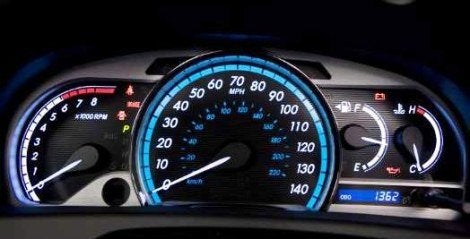 On the design side, Toyota has never been known to be exciting. The Venza, on the other hand, is evidence that Toyota might be trying to change that. All-around, the Venza looks sporty with sharp lines and a muscular stance. Although I’m not a fan of how the front looks, there’s no denying it’s more aggressive than most of their lineup. Inside, the design carries over into an attractive cabin and modern, almost Prius-like command center. The gauges are well set up with a large speedometer and tach that glow blue, and a 3.5-inch multi-information display in the middle of the dash. Unfortunately, the only available interior colors are ivory and light gray. There is no dark interior option; why not is a complete mystery to me.

The features included standard are about as convenient as you can get. The center console is huge, and opens the standard way, slides, and the cup holder area slides back as well giving you even more room. An auxiliary jack inside makes for easy MP3 player hookup, and even includes a dock to hold your device for easy access (although it needs to be taller to accommodate some cell phones.)

The optional voice-activated touchscreen DVD navigation system works semi-well. It’s slow to respond and often lags quite a bit, the interface is a little bit confusing, and you can’t use it while the vehicle is moving (one of my pet peeves.) It does, however get you where you need to go, and if you have the rear backup camera installed, will display that video on its screen. The navigation package also includes Bluetooth, satellite radio, and an excellent 13-speaker JBL surround sound system. Optional automatic high-beams are a unique option that you usually see on higher-end cars. Rear seat passengers will love the optional panoramic glass roof, rear air vents, and legroom. An optional rear-seat DVD entertainment system will keep the kids busy on long trips. Fold the rear seats down and you’ll have 70.1 cubic feet of cargo room – plenty for most people. Driver and front passenger have more than enough space up front, but tall drivers might find that the vertical seat adjustment doesn’t go down far enough. It gave me a sense of sitting up too high. The seats themselves leave something to be desired as well; I could never get completely comfortable in them, and there is virtually no bolster support to keep you in place.

One thing about the interior that is atypical of Toyota is the poor build quality. I noticed huge gaps between panels, cheap plastic, panels that didn’t line up properly, and poor quality leather, wrapped loosely around the seats. Another annoyance about the interior: the sun visors don’t extend – a feature that should be (and usually is) standard on all new cars. 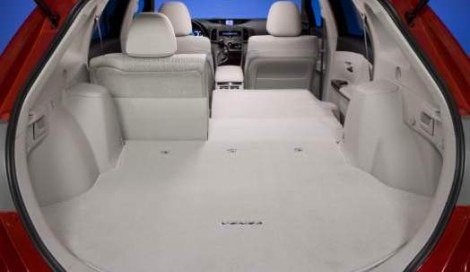 Driving the 2009 Toyota Venza was pleasant and uneventful. The cabin is very quiet, filtering out road noise well. The V6 engine and six-speed automatic transmission are a perfect match here, and prove very capable. The ride could have been smoother at times (though that may been a product of our upgraded 20-inch alloy wheels,) and considering its height compared to an SUV, we experienced too much body roll. Otherwise, handling is good, and feels like you’re driving a sedan instead of a wagon.

Overall, the 2009 Toyota Venza is a highly capable vehicle in somewhat of a new class. The awkward 2010 Honda Accord Crosstour will be released next month and will give shoppers an alternative to the Venza, then expect to see other competitors slowly make their way to the showrooms. Until then, if the Toyota Camry doesn’t have enough room and you don’t need an SUV, check out the 2009 Toyota Venza. Aside from a few annoyances that Toyota should work out, it’s worth a good look.