The Lexus LF-Ch Compact Hybrid is an odd little car. Or, to be more exact, it’s odd that Toyota would badge a car like this as a Lexus. The hybrid part makes sense, but making a small hatchback as a Lexus, even if Toyota is calling it a “Premium Compact”, seems to run counter to what Lexus has been marketed as up to this point. The fact that Toyota will be showing the Lexus LF-Ch Compact Hybrid at the 2009 Los Angeles Auto Show this coming December points out that the company is pretty seriously considering offering the car in North America.

A Lexus LF-Ch Premium Compact Hybrid … will Americans go for that?

\”Lexus has been leading the luxury hybrid market ever since we came out with the RX 400h in 2005. To continue raising the hybrid benchmark, we need to continue exploring hybrid technology in different segments. The LF-Ch concept gives us the opportunity to gauge consumer reaction and help us determine whether or not this would be viable for production,\” said Mark Templin, Lexus division group vice president and general manager.

OK, hard to argue with that, and there might be a niche to be exploited here. Lexus hasn’t offered up any info on the mechanicals of the LF-Ch, preferring to delve deeper into styling details and interior features ahead of the LA show.

Designed by Toyota\’s North American-based research and design center, Calty Design Research Inc., the LF-Ch is trying to study the needs of young urbanites and consumer values in a compact luxury vehicle. \”The LF-Ch concept is the next evolution of the compact luxury vehicle. We were able to create a beautifully designed hybrid with a deep sense of mystery and intrigue,\” said Kevin Hunter, president of Calty.

On the outside, Calty was going for strong and simple lines. They kept the stance wide and the shoulders high and even though it’s a five door, they wanted to make it coupe-like by blacking out the B-pillar and concealing the rear door’s entry button in the chrome molding.

Up front there’s an assertive grille and a wide front bumper and air dam to give the hybrid concept a more powerful look. There’s also the now common practice of LED taillights and headlamps and they let you and everyone else know that it’s a hybrid with hybrid side badging and a blue Lexus logo. On the inside there’s metal and leather trim, an asymmetric dashboard as well as leather, and metal detailing on the door panels, instrument panel and seats. A wide grip steering wheel with integrated paddle shifters aims to keep things sporty as does the instrument panel that features large twin dials with a uniquely embellished turbine blade design. There’s also a blue headliner light bordering the roof.

The LF-Ch also has Lexus\’ Remote Touch controller with user-adjustable haptic feedback that allows the driver or front passenger to operate the navigation, audio and climate systems. This system is also currently found on the 2010 HS 250h hybrid and RX luxury utility vehicles, Now, there’s no reason to think that this is a bad move on the part of the Lexus brand. If you’re firmly planted in only one market segment, you rise and fall with the fortunes of that segment. So diversifying is usually a good strategy overall. And there just might be a market for this sort of car. Being small and a hybrid might have a certain appeal to the affluent and green conscious urban dwellers. It will be interesting to see if they can pull this off. 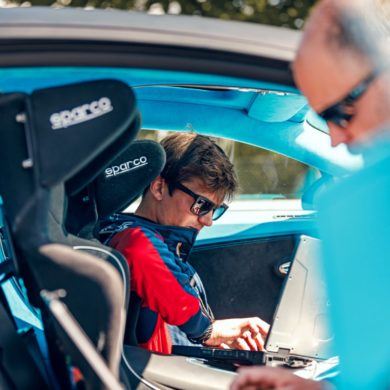